Legislators who return to Raleigh later this month to take up redistricting got an earful Thursday from citizens across North Carolina.

House and Senate Redistricting committee members held a six hour public hearing at seven locations around the state, all connected via videoconference.

Catawba Couty resident Judith Ivester, who described herself as a Independent voter, told Republican lawmakers that “this is not democracy, this is revenge.” She complained under the proposed maps, Hickory would become politically insignificant with the city carved up into three congressional districts – the 5th, the 10th, and the 11th.

But Guilford County resident Jeff Hyde praised Republicans for being “noble” in drawing the new districts. Hyde said after years gerrymandering, he had hoped the GOP would “stick it to the Democrats.”

Reverend William Barber, the president of the NC NAACP, called efforts to pack and stack the districts  “a perversion of the Voting Rights Act of 1965.” Barber promised the redistricting chairs the matter was headed to the courts.

Republican legislators say the district maps are fair and legal.

To hear a portion of Thursday’s videoconference, click below: 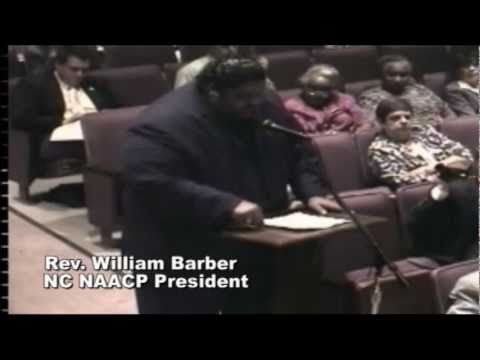 (Our apologies for the technical issue causing the flickering on the left side of the screen.)