It appears that Governor Pat McCrory is on track to release his proposed budget plan later this week. Legislative budget writers tell WRAL.com the spending plan could be made public as early as Wednesday.

Since his inauguration, McCrory has stressed there would be no new money this year, and that government would need to live within its means.

Alexandra Sirota, director of the N.C. Budget and Tax Center, says she would like to see Governor McCrory recommit to investing in the state, particularly in the areas of education, public safety, and health care.

“Certainly something toward pre-recession spending levels is something we absolutely need to see,’explained Sirota. “And I think key to that is what he’ll put forward in terms of a tax plan. And there we think the principle of not shifting the tax load to low and middle income North Carolinians is really going to be essential.”

Sirota, who appeared on News & Views with Chris Fitzsimon over the weekend, notes that it’s troubling that the governor has signed into law a reduction of the state Earned Income Tax Credit, which aids 900,000 low-income working families, while members of the House have voted to repeal the estate tax.

Last Thursday, the NC Justice Center delivered to Gov. McCrory and members of the state legislature nearly 8,000 signatures on a petition to stop shifting the tax burden onto working people.

To hear more of Sirota’s take on the future of the state EITC and tax reform, visit the Radio Interview section of the NC Policy Watch website where you can download a podcast of the full interview. 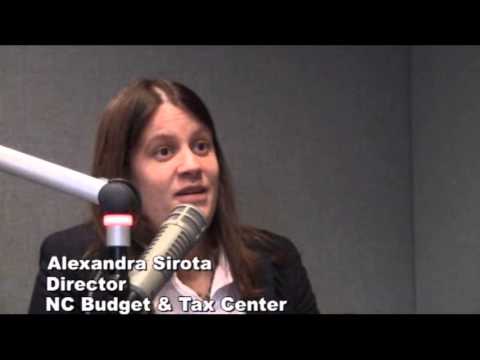