Pro-life groups say the legislation protects a female fetus in certain cases where there is a gender bias in favor of boys. Bill sponsors acknowledged while this has been an issue in other countries, there was no data on actual cases in North Carolina.

That prompted Guilford County Rep. Alma Adams  to call the bill “a wolf in sheep’s clothing’:

“This bill will do nothing to combat what we say is a problem, that really doesn’t exist,” said Adams. “It’s a smokescreen. The real agenda is to punish doctors, to ban all legal abortions in our state.”

The American Civil Liberties Union of North Carolina (ACLU-NC) issued a statement Tuesday saying that the legislation clearly intrudes on the doctor-patient relationship:

“This bill undermines women who make the difficult decision to terminate a pregnancy by suggesting that they might do so for trivial reasons and should not be trusted to make their own health care decisions,” said ACLU-NC Policy Director Sarah Preston, who testified against the bill during a May 1 committee hearing. “Most North Carolinians agree that the government has no business placing itself between a woman and her doctor, but this vaguely worded bill would do just that, forcing health care providers to become interrogators out of fear of litigation from people who may have no relationship to the patient. We urge the Senate to reject H.B. 716.”

To hear a portion of Tuesday’s debate click below: 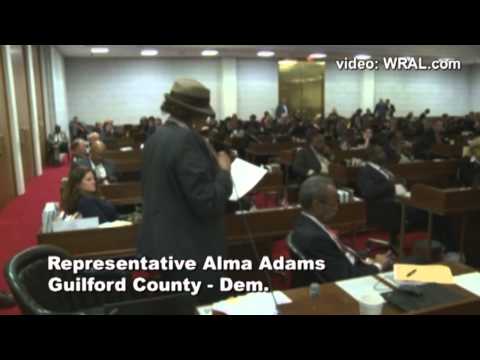