Think Progress recounts the first debate of the primary season this way:

“Is climate change a fact?” the moderator asked in the video, which was posted by Buzzfeed. The questioned produced a brief flurry of laughter from the audience as well as several repressed snickers from the candidates. All four then followed with a curt “no” — though Brannon did append “God controls the climate” to his answer. 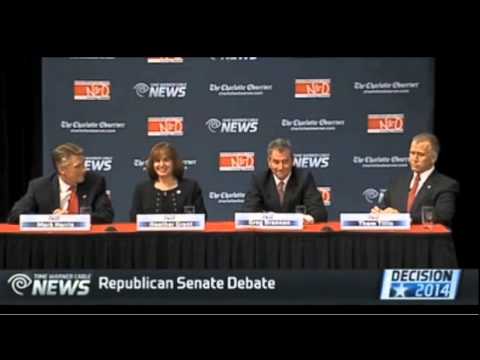 Here’s how the News and Observer’s John Frank and the Charlotte Observer’s Jim Morrill and Ely Portillo summed up the hour-long face off:

‘Despite the need to differentiate themselves, the four candidates found more common ground. All oppose the Affordable Care Act. All oppose medical marijuana. All want to eliminate federal agencies. All believe Russia is the biggest foreign policy threat. And all believe climate change is not a fact.

WRAL hosts a second debate this evening at 7:00 p.m., again with Harris, Grant, Brannon, and Tillis.

Some of the less well-known candidates vying for a chance to take on U.S. Senator Kay Hagan will get their chance to share their platforms on Thursday evening.

Your final chance to hear from the GOP Senate hopefuls comes Monday when UNC-TV will host a one-hour debate at 7:00 p.m. in a statewide broadcast.