Despite having attempted to distance himself from newspaper advertising for a conservative Christian event that featured his image and the words: “Come Join me in a time of worship, prayer, fasting and repentance,” Gov. Pat McCrory did show up and speak at a Saturday event in Charlotte organized by a far right religious group known as the American Renewal Project which argues that the United States is a “Christian nation.”

McCrory used his few minutes on the stage to talk about substance abuse and to ask the people who were in attendance to join in the effort to combat the problem.  “We need your help because government cannot do this alone, you can do it, God can do it,” the Governor stated.

What was weirdest and most disturbing about McCrory’s appearance, however, was the spectacle of several middle aged men crowding around the Governor to lay their hands on him and dispense statements of hate and fear masquerading as “prayer.” Click the video below to watch as a fellow who appears to be American Renewal Project founder David Lane making several remarkable claims, including:

For this, Lane said, the United States “deserves judgment.” He then called on attendees to pray for McCrory and made several other offensive claims — including that the U.S. is a nation that was “founded for the glory of God and the advancement of the Christian faith.” Click below to watch: 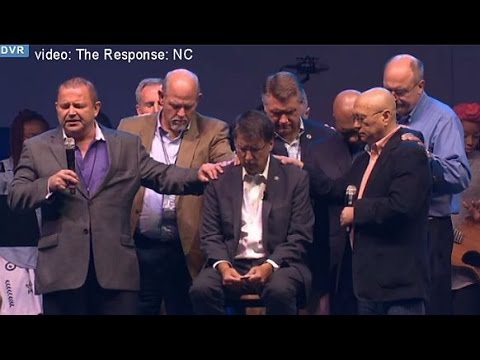