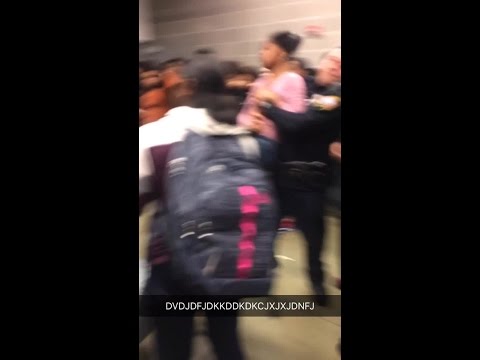 When Letha Muhammad first saw the video of a Rolesville police officer slamming a Wake County teen to the ground, she—like many who have spoken up since the violent encounter last week in a North Carolina high school—says she was “appalled.”

“I felt sad for this young lady and her family,” said Muhammad, of the Education Justice Alliance, a grassroots group that advocates for equity in Wake County Public School System’s discipline practices.

“To see that in black and white and color, this man pick up this small young person and slam her to the ground, I would like to say I was shocked,” she adds. “But I’ve traveled across the country for social justice campaigns and, unfortunately, I’ve heard of this happening, just not in Wake County. My heart goes out to the family.”

Now, Muhammad and other local protesters say they plan to call on leaders in the Wake County school system to end an ongoing agreement that allows armed police to provide security in local schools.

The video, which was posted to Twitter on Jan. 3, shows a police officer lifting a female student at Rolesville High in the air and slamming her to the ground. Media reports said the girl was attempting to break up a fight when the officer, Ruben De Los Santos of the Rolesville Police Department, dragged her away.

The video prompted strong reactions online, including a condemnation from the ACLU of N.C.

Disturbing use of force at #rolesvillehigh that should never be used against kids in schools. Contact us if you have info about incident.

School officials have already said they plan to review their agreement with police in the wake of last week’s controversial altercation. Meanwhile, De Los Santos has been placed on administrative leave with an investigation ongoing.

But protesters say they want to see major changes in how the school system operates. Muhammad will join advocates with the Youth Organizing Institute and other community members in holding a press conference at the district’s headquarters in Cary Tuesday.

She said Thursday that the group’s top goal will be removing police officers from local schools. “But we recognize that process won’t happen overnight,” she says. “So along with that, we’re also looking for greater training of school resource officers (SROs) as well as community input” in the district’s agreement with local police.

As an eventual replacement to SROs, the groups plan to ask district officials to shore up school support staff with more social workers, counselors and what she calls “peace counselors,” parents and teachers trained to head off violence in schools.

“We recognize with young people that things will happen,” Muhammad adds.