WASHINGTON — A rapidly rising number of federal lawmakers are calling for President Donald Trump to be removed from office, either through a process outlined in the 25th Amendment or through impeachment.

The Democratic leaders of the U.S. House and Senate gave their support to calls for his removal that began Wednesday, after Trump incited the crowd of supporters that swiftly became a violent, destructive mob that ransacked the Capitol.

House Speaker Nancy Pelosi on Thursday condemned Trump as having “committed an unspeakable assault on our nation,” and said that if the vice president and Cabinet officials do not seek to remove Trump, that Congress may begin another impeachment process.

“That is the overwhelming sentiment of my caucus,” Pelosi said, calling it an “emergency of the highest magnitude.”

Trump’s tenure is set to end in a matter of days, when President-elect Joe Biden is sworn in on Jan. 20. It’s not clear if House Democrats would be able to act before then to carry out articles of impeachment, but in theory, invoking the 25th Amendment could be done quickly.

Here’s more on what the 25th Amendment says, and when it has been used before:

Why was the 25th Amendment added?

The 25th Amendment to the U.S. Constitution was approved in 1967, in the wake of President John F. Kennedy’s assassination. It was intended to clarify succession procedures in the event that the president dies, is removed from office, or is “unable to discharge the powers and duties of his office.”

What exactly does the amendment say?

There’s also a section on temporarily transferring presidential authority to the vice president, intended for scenarios like the president undergoing anesthesia for surgery.

A final section provides for transferring presidential power if the president is unable to fulfill his constitutional role but he or she cannot or will not step aside. That provision requires approval from the vice president and a majority of either the Cabinet or another body that Congress may designate. Congress has never created such a commission, though Raskin introduced legislation to do so.

The number of Cabinet officials who could be involved in such a discussion shrunk by one Thursday, when Transportation Secretary Elaine Chao — who is married to Senate Majority Leader Mitch McConnell (R-Ky.) — resigned.

When has the 25th Amendment been used?

President Ronald Reagan invoked it once, and President George W. Bush did twice when the men underwent medical procedures. They transferred authority to their vice presidents for a matter of hours, according to the National Constitution Center.

Trump already was impeached by the House in December 2019 on charges of abusing his power and obstructing Congress. The Senate acquitted him of those charges in February 2020.

That process is legally complex and typically unfolds over a matter of weeks or months. And Pelosi declined on Thursday to offer a timeline on what comes next. If Trump were to be impeached and found guilty, it would prevent him from being eligible for public office in the future.

Who has signed on to the efforts to remove Trump from office?

Some Republicans have joined. U.S. Rep. Adam Kinzinger, (R-Ill.), has called for Trump’s removal. Maryland Gov. Larry Hogan, another Republican, told reporters Thursday that the country “would be better off” if Trump resigned or was removed.

Even the president of the National Association of Manufacturers has urged Pence to invoke the 25th Amendment.

Biden declined to address calls to invoke the 25th Amendment on Thursday, instead blaming the president for inciting a mob, and labeling the rioters as “domestic terrorists.”

Amid those mounting pressures for his removal, Trump released a video Thursday, finally acknowledging that “a new administration” will begin later this month and that he would focus on “ensuring a smooth, orderly, and seamless transition of power.”
He did not acknowledge any responsibility for the riot, and told his supporters: “Our incredible journey is only just beginning.” 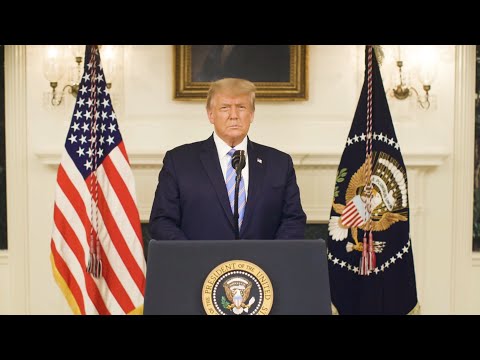