Legacy of white supremacy continues to create barriers for workers, especially during COVID-19

By Patrick McHugh
In COVID-19, NC Budget and Tax Center, What's Race Got To Do With It? Black History Month could just as easily be called “American present February.” Nothing in the U.S. is ancient history. Someone who will graduate college this year at age 23 has been alive for nearly 10% of U.S. history, and anyone lucky enough to reach 80 has personally witnessed one-third of the American experience. The presence of the past is particularly plain to see during COVID-19. The mold of the past year was shaped by generations of social and economic policy that layered the burden of COVID-19 most heavily on communities of color.

As a small part of reckoning with our history and celebrating the lives of Black people who have struggled for justice, we’re releasing a few resources over the next few weeks that can be food for thought and reflection.

An overview of what each includes is provided below, but here’s how to skip straight to the resources themselves:

A conversation about race, power, and workers organizing against long odds

We sat down toward the end of 2020 with historian Bob Korstad, who has spent his life grappling with the past, documenting working peoples’ stories, and sifting through that rich inheritance for lessons about how we can move forward. The conversation addressed how economic and political elites stoke racial divisions to preserve their power, and how many of the dangers facing working people during COVID-19 are rooted in the history of white supremacy. We also spent time celebrating some Black organizers from North Carolina’s history and ponder some of what their examples can teach us today. 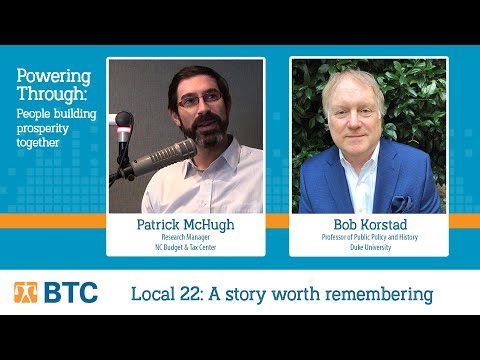 Download a PDF of this chapter of the State of Working NC 2020 report.

Racism, both overt and subtle, is among the most powerful weapons rich business interests ever wielded against working people. Many of the laws which have left working peoples’ lives and livelihoods at risk during COVID-19 were originally passed to preserve white supremacy, particularly in the South.

The masters of Jim Crow saw the New Deal coming and were terrified. Facing the prospect of losing their ability to dominate the lives of Black people (along with many white workers), powerful Dixiecrat Committee Chairs in Congress carefully sabotaged New Deal legislation to preserve white supremacy and Black servitude.

The most common trick was to exempt agricultural and domestic workers from protections and rights included in the New Deal. Because the overwhelming majority of Southern black people at the time worked either in the fields or domestic service, these provisions effectively put most Black people beyond the reach of the New Deal’s worker protections and economic safeguards. As is so often the case with implements of white supremacy, these provisions also hurt millions of white people and helped to maintain race as a weapon elites could use to undermine workers’ efforts to organize.

Some of the exceptions have been reversed, but many persist even now generations later. This legacy of white supremacy continues to deprive many workers on the front lines of COVID-19 of the basic protections many people take for granted.

The Right to Work (for less)

Early proponents of what they branded “right-to-work” laws weren’t shy about their racist motivations. Seeing how integrated union organizing could upend the system of subjugation southern business elites relied on to maintain their economic power, they stoked racial fears among white workers and legislators.

Rooted in Racism: Slavery and the foundations of U.S. Capitalism

Download a PDF of this chapter of the State of Working NC 2020 report.

None of the conditions working people face in the COVID-19 crisis happened by accident. To fully understand why so many working people are being forced into unsafe working conditions and tossed aside by companies protecting their bottom line, we need to look at how we got here. The United States’ unique brand of capitalism is steeped in our history of slavery, exploitation of working people of all races, and the persistent stain of white supremacy.

People outside the South often think of slavery as a uniquely regional legacy, failing to recognize just how much of the economic rise of the United States was rooted in slavery. From sea to shining sea, the American wealth was built on the violence and exploitation of slavery.

American financial institutions and plantations in the late 18th and early 19th centuries needed one another. Expanding the plantation system westward to took a huge amount of capital. A lot of that capital was provided by banks and insurance companies in the North, which also means the much of profit from the slave economy flowed northward. By some estimates, New York banks, shipping businesses, and insurance companies collectively took in 40% of the revenue associated with the U.S. cotton.[1]

A growing body of literature documents the role Southern plantation owners played in creating the field of modern “scientific” production management. When cotton prices plummeted below 10 cents per pound in the early 1800s and again in the 1840s,[2] plantation owners became obsessed with squeezing more production out of fewer bodies. Many of the practices still used today to maximize worker productivity were actually invented or refined by plantation owners and first imposed on enslaved people.