Even before the jump in COVID-19 cases related to holiday travel became clear, local labor market data for November showed the ongoing consequences of federal and state inaction. The most recent aid bill passed by Congress in December provided some long-overdue assistance, but not nearly enough to get families through to the end of the pandemic.

While it’s certainly good Congress finally passed more COVID-19 assistance in December after months of inaction, the financial bridge won’t span the gulf that still exists between where we are now and the other side of this pandemic. As the latest labor market data confirm, COVID-19 is still inflicting the worst pain on many families with the least financial cushion, so leaders in Raleigh and Washington, D.C., still have a lot of work to do to sustain people during this unprecedented crisis. 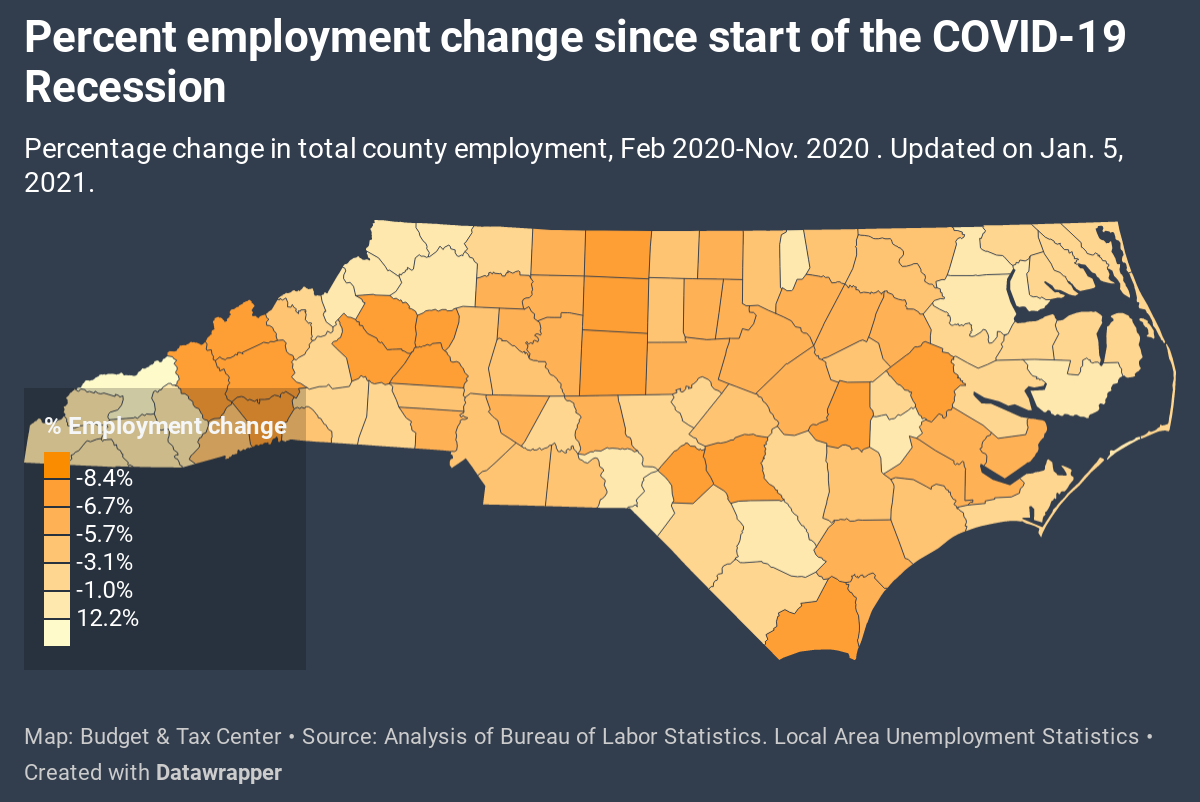 Patrick McHugh is the Research Manager at the NC Budget & Tax Center — a project of the North Carolina Justice Center.

Billionaires are getting even richer during COVID-19

By Patrick McHugh
In COVID-19, NC Budget and Tax Center Many corporate titans have profited handsomely from the COVID-19 pandemic. Even while the death count rises, millions of American families struggle to make ends meet, and main street businesses shutter, some of the biggest companies in our country have recorded record profits. Corporate windfalls from this catastrophe have further concentrated wealth in a few hands as 647 billionaires in the United States saw their personal fortunes grow by nearly $1 trillion between the start of the pandemic and mid-November.

That kind of haul is hard for most of us to wrap our minds around What would that kind of wealth mean for people whose lives have been upended by COVID-19? The $960 billion in new wealth for America’s billionaires would be enough to:

All told, less than 700 people profited enough in a few months to sustain a family of four in North Carolina for over 20 million years. (If you’re wondering, humans and the rest of the Great Apes only evolved around 6-8 million years ago). As people struggle to put food on the table, stay in their homes, keep the lights on, and stay warm through the winter, there’s no excuse for a handful of billionaires to make off with almost a trillion dollars. It shows what’s broken in our country and why we need a better kind of recovery.

Patrick McHugh is the Research Manager for the N.C. Budget & Tax Center.

Those federal COVID-19 checks: What they mean and who might get left out

By Patrick McHugh
In COVID-19 Odds are, you’re probably wondering when the direct cash assistance passed by Congress last week as part of the CARES Act is going to hit your mailbox or bank account. Issuing direct cash payments was without a doubt the right move, but it won’t fill the yawning financial hole facing many families and it leaves some serious questions unanswered. Cash payments won’t meet families’ needs for long Direct cash payments are the single fastest way for government to support families in a time of crisis, whether that be a pandemic, illness, job loss or other unforeseen event. The CARES Act creates a $1,200 one-time payment for all U.S. residents or $2,400 for married couples, with an additional $500 per child dependent, which phase out for high income people.

That’s certainly nothing to sneeze at, but it won’t address the long-term economic fallout of the COVID-19 outbreak — particularly given that roughly 2 out of every 5 households in North Carolina can’t survive above the poverty line for three months without income, and many of those families are the low-income workers first to lose their jobs to the COVID-19 crisis.

Based on our most recent Living Income Standard report, the direct aid provided by the CARES Act will pay for the basic necessities for roughly two to four weeks. As can be seen here, families will burn through the aid faster in the more expensive urban parts of North Carolina, and it also depends on family size and how travel and child-care costs change during this time. Regardless of the details, many families will certainly use up the cash aid and need additional support before this crisis is over.

Direct payments to people in need are the best economic stimulus, but these checks won’t pull us out of the COVID-19 recession

Putting money in people’s pockets is the best way to stabilize a quaking economy. As we saw during the Great Recession, direct payments to individuals had a significantly larger economic return on investment than tax cuts. Thankfully, these cash payments are not the only provision of the CARES Act that puts money in the pockets of people and families. The package boosts the amount and duration of Unemployment Insurance payments for people who lose jobs or hours due to the outbreak. Particularly in states like North Carolina where existing UI benefits are grossly inadequate, the UI provisions will prove far more important than one-time checks for many families.

That said, we are confronted with a sobering reality. The CARES Act will not pull us out of a downturn that is getting worse by the day and will almost certainly end up being one of the most severe economic collapses in American history. More than 300,000 North Carolinians have filed for unemployment since March 16, the fastest spike in job losses on record, and that’s just the first wave of impacts, which is mostly concentrated in customer services.

The rebate aid is really about immediate financial survival, so leaders from the federal to the local level need to be setting up the economic stimulus we need to actually recover and avert a prolonged recession. END_OF_DOCUMENT_TOKEN_TO_BE_REPLACED There’s a lot to digest in the $2 trillion rescue package Congress just passed. The wide-ranging bill contains some vitally needed aid in this moment of crisis, some dubious handouts to multinational corporations, and some provisions that could be helpful or irresponsible depending on how they are implemented. With all that remains uncertain, there are, however, some things we know already.

The COVID-19 pandemic has achieved the recently unthinkable, forcing bipartisan compromise and cooperation. The America CARES Act evolved rapidly over the past several days as Democrats and Republicans in Congress negotiated over both substance and scope. A Congress often girdled by rancor managed to overcome partisan disagreements and deliver needed tonic to a nation in distress. We’ve become unused to seeing our most powerful institutions respond to the pressing needs of the day, so take some solace in this moment that Congress stepped up to the plate.

For a bipartisan response to be most effective will require swift implementation of the America CARES Act and recognition that there are still gaps in relief and emerging issues that will require further response to fully address the country’s pressing needs.

Among the implementation considerations will be the speed with which cash gets into the pockets of people who need it the most and how we provide relief to impacted people who are not provided adequate relief in this bill, as well as whether corporate executives use it to enrich themselves and their wealthy shareholders.

Moreover, while many important provisions were included like unemployment insurance enhancements and small business supports, some issues like paid sick leave and much-needed health care supply shortages were not addressed. Finally, some of the provisions like aid to state and local governments were valuable, but they will likely not address the full impact of the pandemic. END_OF_DOCUMENT_TOKEN_TO_BE_REPLACED

Just as it is doing with our health care system, the COVID-19 pandemic is revealing North Carolina’s economic fragility. A reliance on low-wage jobs has left families with no financial cushion, and elected leaders are scrambling to make up for our lack of an adequate social safety to save people in a moment of crisis.

The hammer is going to fall first and hardest on poorly paid workers in restaurant, retail, tourism and other recreation jobs. After a decade of job growth being concentrated in low-wage service jobs, over one-quarter of all private sector jobs in North Carolina are now in leisure, hospitality and retail. Sadly, these are precisely the workers who can least afford to lose income and often don’t have employer-provided health care, paid sick leave or other benefits that would soften the blow.

To make matters even worse, the collapse of service sector jobs will likely hit particularly hard the communities that were already economically struggling. Roughly half of North Carolina’s counties never recovered all of the jobs lost during the Great Recession, and many of them are the most heavily reliant on the low-wage service jobs at most immediate risk of disappearing.