When you get a minute, be sure to check out Paul Krugman’s Saturday column in the New York Times, in which he lauds newly-elected New York Congresswoman Alexandra Ocasio-Cortez for her proposal to dramatically increase taxes on the rich. Ocasio-Cortez has drawn fire from lots of grumpy old conservatives for saying that marginal tax rates on the very wealthy ought to be raised north of 70%, but as Krugman explains, the proposal is actually on the money and endorsed by some of the world’s smartest economists.

Here’s the conclusion to Krugman’s essay:

So AOC [Ocasio-Cortez], far from showing her craziness, is fully in line with serious economic research. (I hear that she’s been talking to some very good economists.) Her critics, on the other hand, do indeed have crazy policy ideas — and tax policy is at the heart of the crazy.

You see, Republicans almost universally advocate low taxes on the wealthy, based on the claim that tax cuts at the top will have huge beneficial effects on the economy. This claim rests on research by … well, nobody. There isn’t any body of serious work supporting G.O.P. tax ideas, because the evidence is overwhelmingly against those ideas.

Look at the history of top marginal income tax rates (left) versus growth in real GDP per capita (right, measured over 10 years, to smooth out short-run fluctuations.): 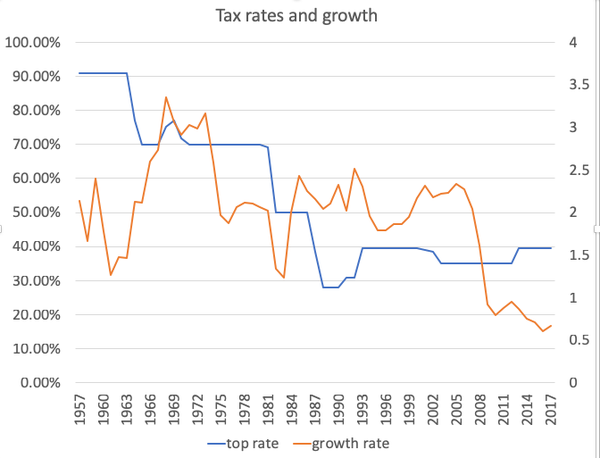 What we see is that America used to have very high tax rates on the rich — higher even than those AOC is proposing — and did just fine. Since then tax rates have come way down, and if anything the economy has done less well.

Why do Republicans adhere to a tax theory that has no support from nonpartisan economists and is refuted by all available data? Well, ask who benefits from low taxes on the rich, and it’s obvious.

And because the party’s coffers demand adherence to nonsense economics, the party prefers “economists” who are obvious frauds and can’t even fake their numbers effectively.

Which brings me back to AOC, and the constant effort to portray her as flaky and ignorant. Well, on the tax issue she’s just saying what good economists say; and she definitely knows more economics than almost everyone in the G.O.P. caucus, not least because she doesn’t “know” things that aren’t true.