If there’s been one enduring image during our pandemic year, it’s been that of the essential worker: The nursing home worker, the grocery store cashier, the postal service workers, and countless hundreds of thousands of others who kept the wheels of the economy turning, often at great personal risk, for shockingly low wages.

A new report by scholars at the Brookings Institution attempts to quantify the contributions of those frontline workers, reaching a critical, bottom line conclusion: We need to do more than just call these workers essential, we have to treat them that way by paying them more, and lifting the barriers, such as structural racism, that prevent them from getting ahead.

“It is long past time that we treat essential workers as truly essential,” the report’s authors, Molly Kinder, a fellow in Brookings’ Metropolitan Policy Program, and Laura Stateler, a research assistant in the same program, write. “Lawmakers in Washington and around the country have the opportunity to turn their policy rhetoric into real change. The recommendations in this report lay out how federal, state, and local policymakers can — finally — give essential workers what they have always deserved: the dignity of a living wage, lifesaving protections, and power in their workplaces.”

Brookings rolled out the findings included in the report during a webinar on Thursday.

The  truth of the economic challenges these workers are facing is right there in the data. Using an essential worker classification data set crafted by Brookings, and 2018 data compiled by the U.S. Bureau of Labor Statistics, Kinder and Stateler found that 23.3 million essential workers were in occupations with a median wage of less than $15 an hour, “comprising approximately half (47 percent) of all workers in these low-wage occupations.”

In addition, Black and brown workers are overrepresented “among essential workers in low-wage frontline positions that pose health risks,” the two scholars found.

One such essential employee, Tony Powell, works as a unit secretary at a hospital in the southeast Washington, D.C. neighborhood where he grew up. He shared his experience of being a frontline worker during the pandemic.

“It is a heavy load to carry,” Powell told Kinder and Stateler, according to the report. “Sometimes it feels like you are carrying a car up a mountain. You can’t put yourself in a bubble when you see people around you dying. I see people I went to school with and grew up with. They’ll come in and just like that, they are gone. It is really mind blowing that you can be here today and gone tomorrow.”

In addition to hiking the federal minimum wage to $15, as has been proposed by congressional Democrats and the Biden administration, the Brookings report also makes several other policy recommendations.

“Since the start of the COVID-19 pandemic a year ago, dozens of frontline essential workers have shared with us their pandemic experiences, the challenges they are confronting, and their hopes for the future,” Kinder and Stateler wrote. “Many said that while it should not have taken a pandemic to make their work visible and valued, it has shown that change is urgently needed.” 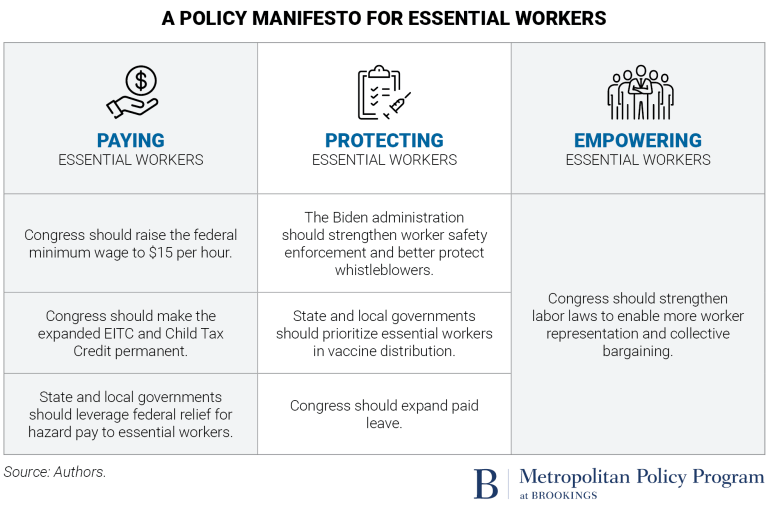 John Micek is the editor-in-chef of the Pennsylvania Capital-Star, which first published this story.