WASHINGTON – Okay, let’s talk turkey about taxes and their implication for U.S. economic growth and inequality. But let’s get real. Let’s get beyond the political kabuki dance in Washington, with politicians echoing well-rehearsed lines. That means focusing on real-world economics.

Discovery No. 1 one is that almost no major U.S. corporation, certainly not those that do business overseas, actually pays the 21% corporate tax rate, set by law. In fact, on average, Fortune 500 companies pay about half that much – 11.3% according to the non-profit Institute for Taxation and Economic Policy and Taxation, working from corporate reports. 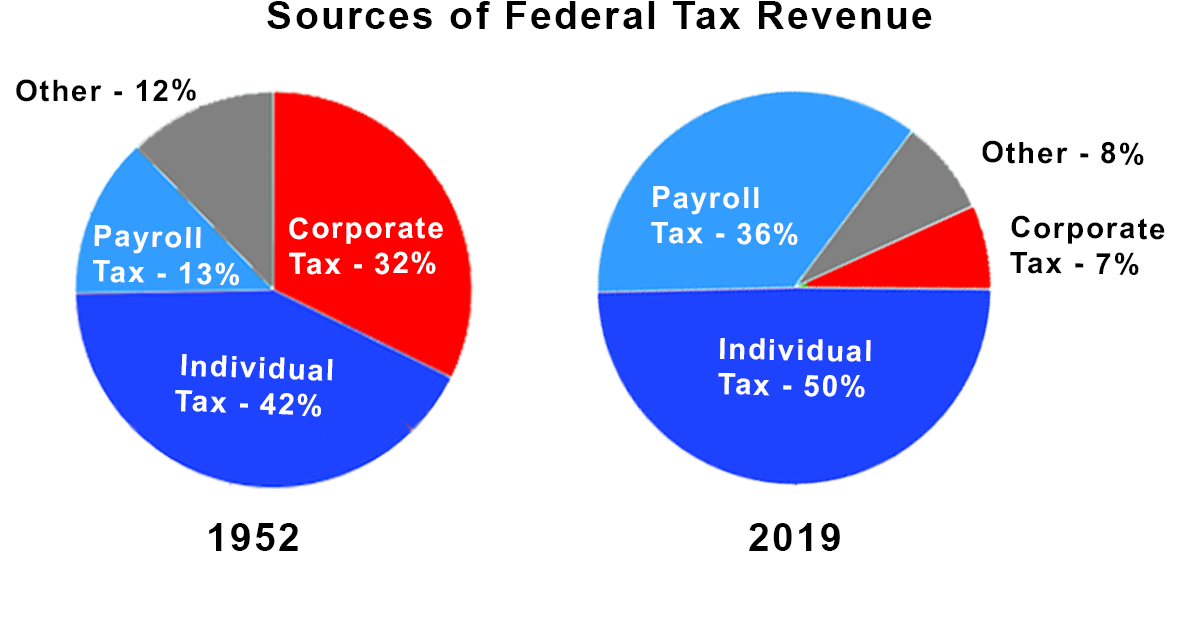 Federal Tax Data from the Center on Budget and Policy Priorities

The second big discovery is that despite endless whining from Corporate America about its unfair and impossibly heavy tax burden, corporate taxes and the corporate share of overall U.S. tax revenues has been shrinking over the past six decades, down sharply from 32% of the total in the 1950s to 7% in 2019. And the rest of us have to make up that difference.

Finally, to get how corporate tax games are played, you have to understand that U.S. corporations keep two sets of financial books – one for the public and the other for the taxman – and that’s legal under U.S. tax law.

The first set of books, shared with investors and the financial press, reports so-called “book income,” which is where companies cast their earnings in rosy terms and brag to Wall Street about how much money they made. The second set of books does the opposite. It’s filed in private to the I.R.S. and it seeks to shrink company profits to the bare minimum, to zero if possible, by using every conceivable tax loophole and deduction. 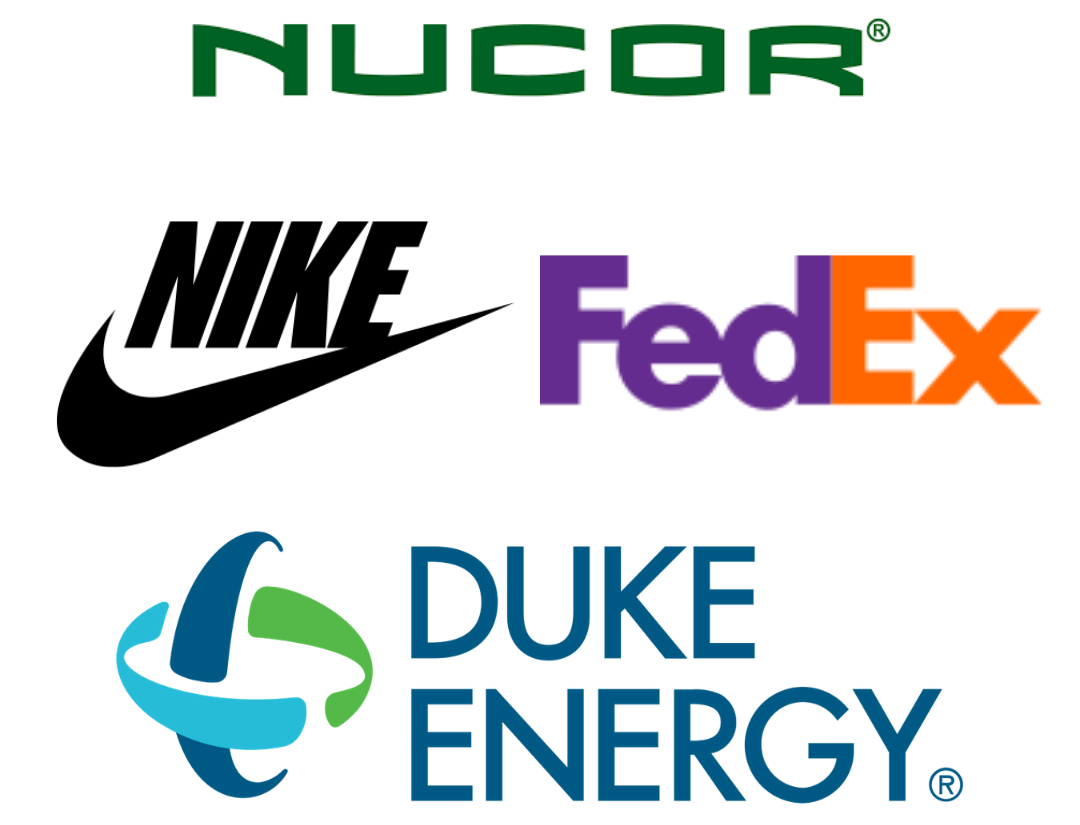 If these 55 U.S. corporations had paid the official 21% tax rate, they would have owed Uncle Sam $8.5 billion, but instead, they got $3.5 billion in tax rebates because they were awarded tax credits. And that’s just the tip of the iceberg.

Over the past decade or two, all the corporate giants have worked this game – Apple, Google, Coca-Cola, Pepsi, Caterpillar, General Electric, Goldman Sachs, Merck, Pfizer, you name it. Collectively Corporate America has avoided an estimated $100 billion a year in taxes, – potentially several hundred billion over several years according to one academic study cited by the Biden administration.

Apple tax dodge – “The double Irish with a Dutch sandwich”

The answer lies in wonky accounting concepts like profit shifting and GILTI – spelled with an I not a Y. In the arcane idiom of tax law, GILTI literally stands for Global Intangible Low-Taxed Income, which is a fancy label for US corporate profits stashed away in overseas tax havens.

Overseas is the keyword here. For several decades, profits earned overseas by U.S. multinationals have been exempt from U.S. corporate taxes, unless companies decide to bring those foreign profits back home. So in real-world Monopoly, overseas profits are a Get-Out-of- Taxes-Free card.

That has covered up to two trillion dollars in profits, and more. Even that did not satisfy Big Business. So the financial geniuses in Corporate America sought other ways to snooker Uncle Sam through what they call profit-shifting – that is, escaping U.S. taxes through paper transactions that shifted income and profits generated by products made, work done, or inventions created inside the U.S. to their foreign subsidiaries.

Apple, for example, became famous for  a tax dodge dubbed as  “the Double Irish with a Dutch sandwich.” This is how it worked. Apple’s creative teams in California would invent some new high-tech wrinkle for the iPhone or the iPad, and Apple would transfer ownership of the patent for that lucrative technology to its subsidiary in a low-tax haven like Ireland. Then it would book the revenues from that technology through the Netherlands and the Caribbean to Ireland so that those profits were taxed at an effective rate of 1% in Ireland instead of then going rate of 35% in U.S.

Caterpillar, which makes tractors and earth-moving equipment in Illinois, ducked U.S. taxes by simply removing the name and address of its home office from its billing invoices and told its foreign customers to send their payments to Caterpillar’s subsidiary in lower-tax Switzerland.

Coca-Cola and Pepsi dodged U.S. taxes by manufacturing their soft drink syrups in low-tax countries like Singapore (Coke) and Ireland (Pepsi) and booking their profits in those countries. In one year, 85 major U.S. companies, like GE, Microsoft, Pfizer, Merck, and IBM, reported total earnings of $800 billion in the tax havens of Bermuda and the Cayman Islands.

Joe Biden is blowing the whistle on this massive corporate tax game, in order to restore fairness to the U.S. tax system. Biden believes that closing the huge foreign loophole in our tax system with a 15% minimum corporate tax will pay off big-time in good jobs, economic growth, and greater American competitiveness if the U.S invests all those new corporate tax dollars in modernizing the nation’s aging infrastructure.

Business groups like the U.S. Chamber of Commerce, Business Roundtable, and National Association of Manufacturers – echoed by Minority leader Mitch McConnell and Senate Republicans – are up in arms. They warn that that higher corporate taxes will backfire. They say it will slow economic growth and cripple U.S. companies in global competition.

But we’ve heard this siren song before and our experience with the Trump tax cuts of 2017 belies tell us not to buy this pitch. In 2017, business leaders promised that cutting corporate taxes would lead to corporate investment in jobs and generate economic growth. But that did not happen. The annual U.S. economic growth rate stayed stubbornly stuck at 2.4 percent for two years before the Trump tax cuts and 2.4 percent for two years after the tax cuts. The promised economic gain did not materialize. 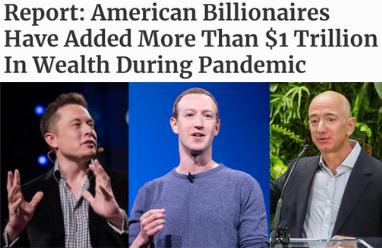 Same thing when U.S. corporations were given a bonus tax cut for bringing home $777 billion in foreign profits. Once again they promised investment, jobs, and growth. Once again it didn’t happen. Instead, the Federal Reserve reports, U.S multinationals poured hundreds of billions of repatriated foreign profits into higher dividends and stock buybacks that sent stocks soaring on Well Street and delivered huge financial payoffs for the corporate and financial elite.

So Biden proposes to reverse that process: Fight economic inequality by stemming the Niagara of corporate profits to the top 1%, by raising corporate taxes. The time is ripe, given the galloping growth of inequality during the pandemic.

Thanks to skyrocketing profits at Apple, Amazon, Netflix, Google, Zoom, and a fleet of hot internet services that we all needed while trapped at home during the pandemic, Americas 650 billionaires – the main owners of tech high fliers – added $1 trillion to their wealth during the pandemic year of 2020, while most American families struggled to stay economically afloat, pay the rent and put food on the table.

That’s the lop-sided inequality that Biden is now trying to reverse by bumping up corporate taxes, so that America can raise the funds to invest in our collective future. “It’s honest. It’s fair,” says Biden. “It’s fiscally responsible, and it pays for what we need.”