On Monday evening, the N.C. House of Representatives finally released its proposed two-year budget for the state, which is expected to pass the chamber by the end of this week. The House budget proposal is only marginally different from the Senate’s, and restricts spending to an arbitrary spending limit like the Senate’s proposal.

It also unnecessarily and severely underfunds public schools in violation of the state’s constitutional obligation to provide a sound, basic education to every child as prescribed by the longstanding Leandro court case, and either fails to meet the needs across a raft of other issue areas altogether, or merely provides token investments that fail to bolster core public structures and systems critical to our collective well-being.

After, as is expected, the House budget passes on a simple majority vote, the Senate and House will appoint members from both chambers to develop a conference committee compromise, which will need to pass both chambers before being sent to the Governor for his final review.

Regrettably, the House’s proposed budget would continue North Carolina on a long path of disinvestment, prioritizing tax cuts that disproportionately benefit the wealthy and corporations at the expense of our communities, rather than using this moment as an opportunity to survey the vast needs across the state and invest our collective dollars to ensure every person – Black, brown, indigenous, and white – can have their needs met.

The plan proposes spending $25.7 billion in Fiscal Year (FY) 2021-2022 and $26.7 billion in FY 2022-2023. Like the Senate’s proposed budget, the House proposal would bring North Carolina’s investments to a 45-year low of 4.56 percent of the state’s economy in the first year and 4.54 percent in the second year. Spending levels continue to fall over $7 billion short of the 45-year average spending as a share of the economy (as represented by the dotted blue line in the chart). 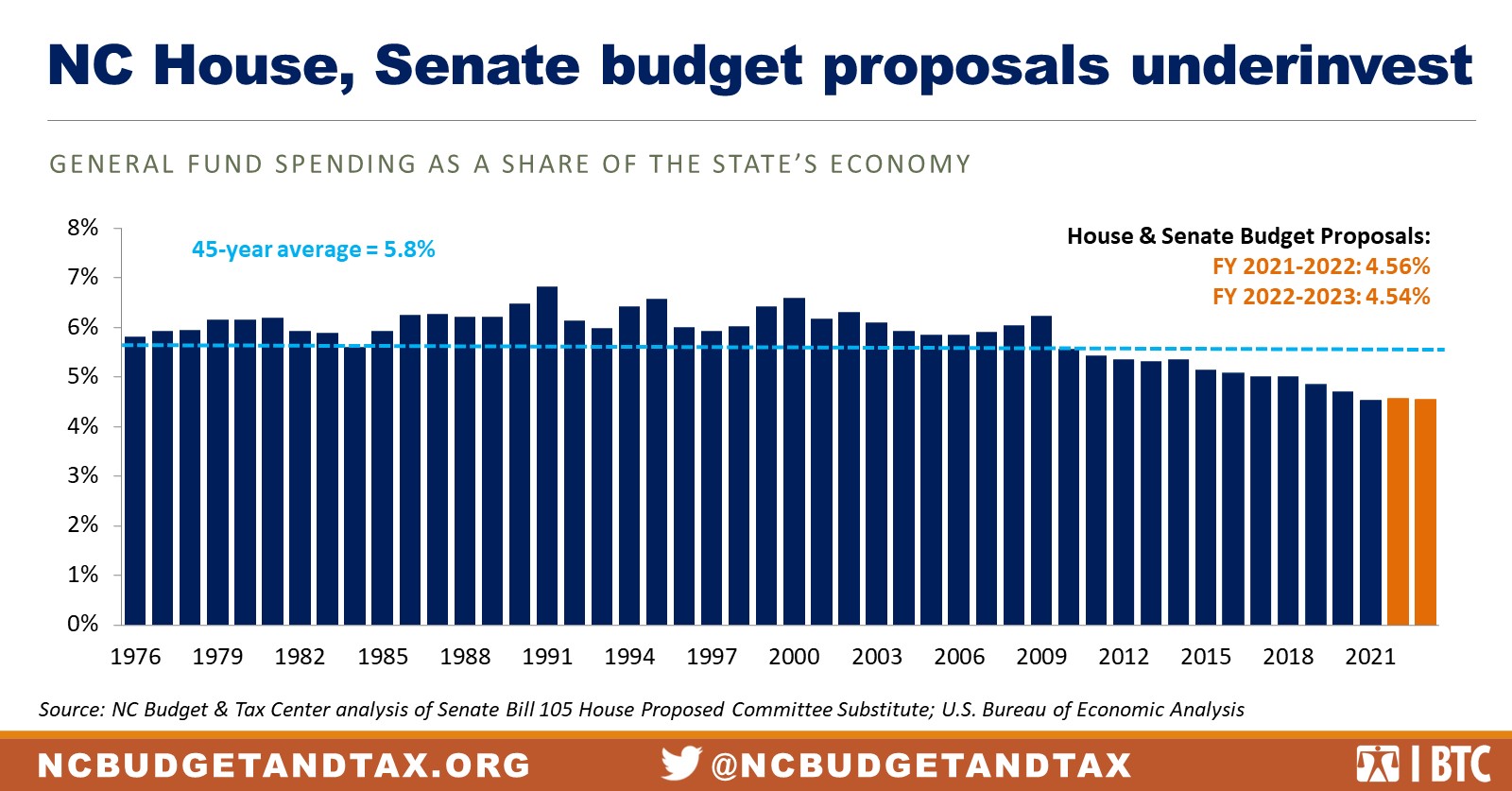 These transfers remain below the Senate’s proposed transfers, yet both plans demonstrate an unreasonable commitment to savings for the future while hardship today is widespread and public investments can put us on a better trajectory. Instead of proposing multi-billion dollar transfers to reserves, the General Assembly could instead choose to address real challenges millions currently face, including difficulties families face putting food on the table and barriers that prevent people from getting back into the labor force, including access to affordable child care and COVID-19 concerns. 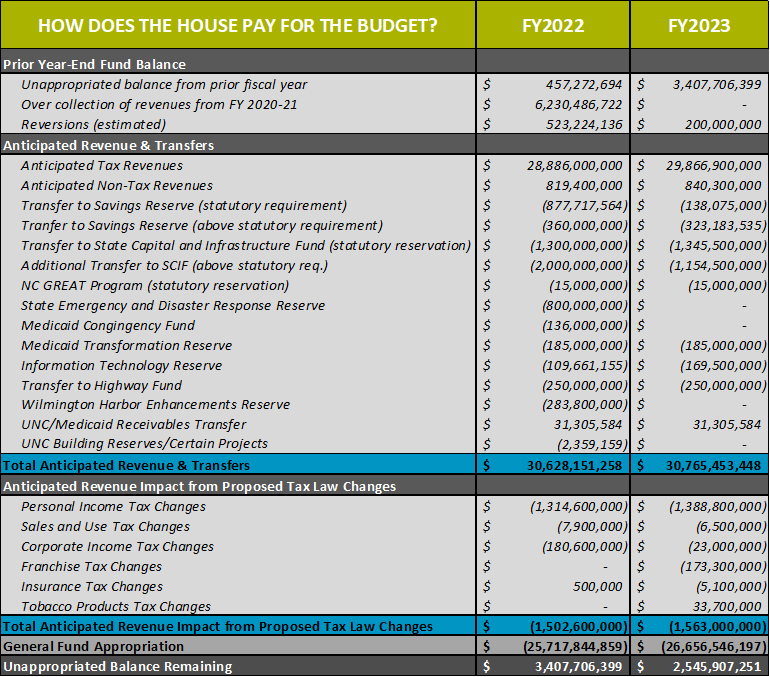 3. Proposal continues to prioritize cutting taxes for the wealthy few over the needs of ordinary North Carolinians

Analysis of who stands to benefit from the proposed tax cuts shows that North Carolinians with the lowest income would receive a meager 2 percent share of the tax cuts when fully implemented, whereas 56 percent would go to those with annual income over $110,000.

The plan would also raise the standard deduction, which would raise the income threshold for those paying a zero percent tax on their personal income. Evidence shows that a more effective strategy to benefit those with the lowest incomes would be a state-level Earned Income Tax Credit (EITC), which is absent in both legislative budget proposals. 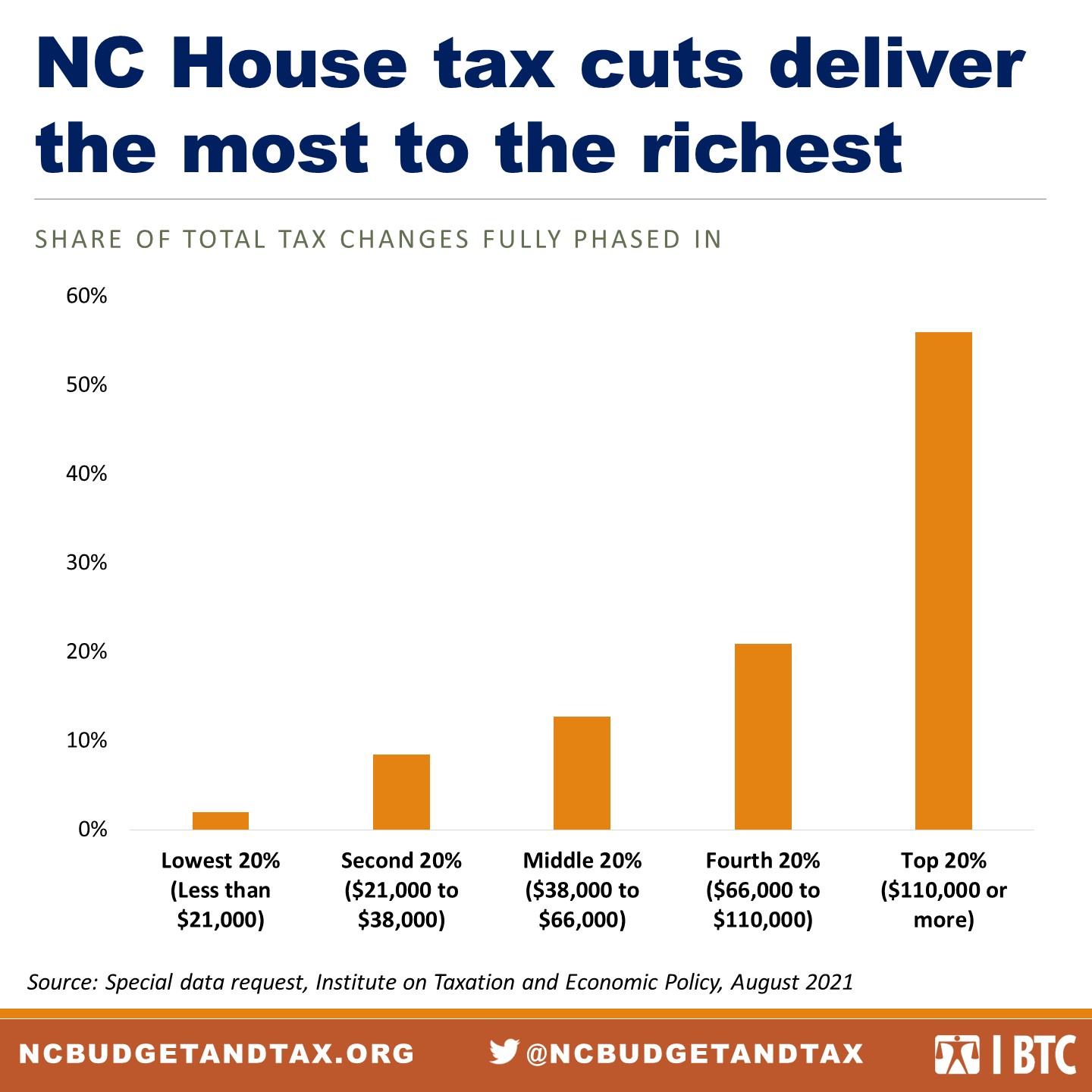 After months of negotiating behind closed doors, the House leadership’s reveal of its spending plan appears to have had little input from either the Democratic or Republican caucus, as demonstrated by the 43 amendments introduced in the House Appropriations committee on Tuesday, most filed by members of the majority party and within the confines of the restrictive rules outlined by leaders, which prevent any real substantive changes.

Prior to the full release of the budget, House leaders released sections of the budget in Appropriations subcommittees, where members were also subject to the restrictive rules for amendments and given little time to read the proposal or pose questions before being asked to vote.

The draconian rules imposed on legislators by leaders in both chambers signals a disregard for transparency and need for a democratic processes that ensure all people’s interests are represented by their elected leaders and our public resources are stewarded for the common good. It compounds the fact that rules set up by legislative leaders in prior years now allow legislators to miss the fiscal year deadline and keep spending at 2019 levels without regard for the needs of today.

Once the House budget passes in the coming days, legislators will once again enter closed-door negotiations to develop a conference report. They would do better by considering not just the differences between the House and Senate proposals but the Governor’s proposal as well. Better yet, they should create avenues for meaningful public input and recognize that at this critical point in the pandemic and economic downturn, public investments and the institutions and people who serve the public good are essential. It’s time we invest in the things that will ensure every North Carolinian has what they need to be healthy and live a prosperous life.