By Faith Miller
In News 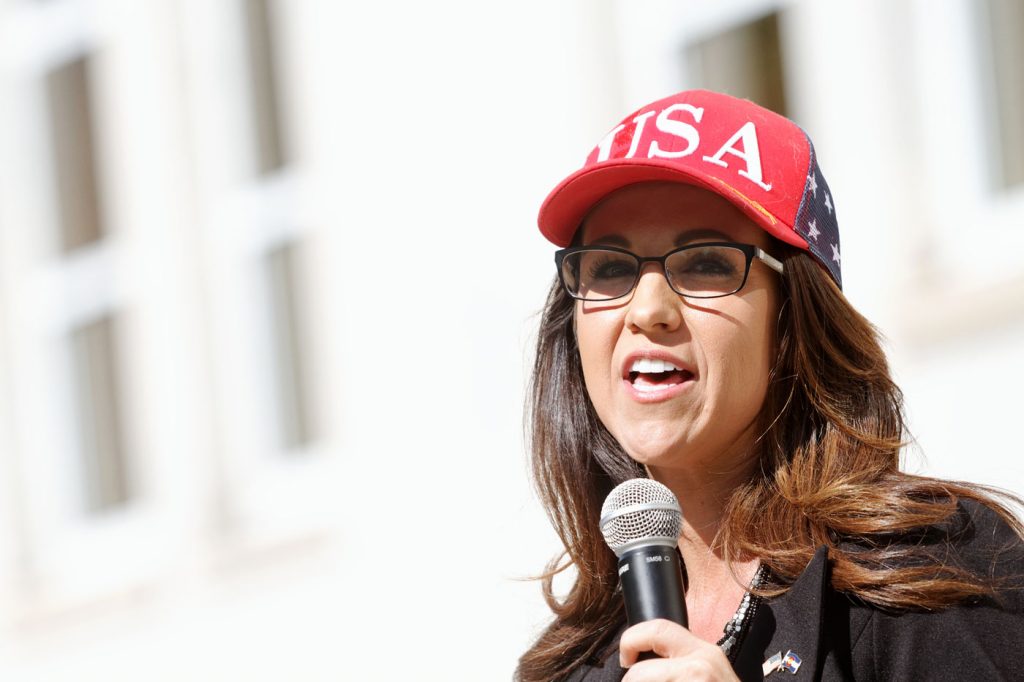 Colorado Rep. Lauren Boebert — then a candidate — speaks to supporters and the press during a MAGA meet-up on Oct. 8, 2020. (Barton Glasser for Colorado Newsline)

Colorado Rep. Lauren Boebert issued an apology Friday after a video circulated showing her suggest that if Democratic Rep. Ilhan Omar of Minnesota were wearing a backpack then Boebert would suspect her of being a suicide bomber.

Boebert, a Republican from the town of Silt, made headlines recently for saying a Omar, who is Muslim, was part of the “jihad squad” during a speech on the House floor.

Despite public outcry, Boebert initially doubled down on that rhetoric in appeals to supporters, including during a speech captured in the video, which was posted by PatriotTakes and was said to be from a campaign event over the Thanksgiving holiday. Omar responded by calling Boebert a “buffoon” in a Thursday tweet.

Boebert tweeted an apology to “anyone in the Muslim community I have offended with my comment about Rep. Omar.”

“I have reached out to her office to speak with her directly,” Boebert added. “There are plenty of policy differences to focus on without this unnecessary distraction.”

I apologize to anyone in the Muslim community I offended with my comment about Rep. Omar. I have reached out to her office to speak with her directly. There are plenty of policy differences to focus on without this unnecessary distraction.

The term “jihad” can refer to a spiritual struggle or a military struggle to defend the religion of Islam, but it is commonly used to describe the “holy war” sought by radical Islamic groups. Meanwhile, the word “squad” is widely used to describe a group of four progressive congresswomen that includes Omar along with Alexandria Ocasio-Cortez of New York, Ayanna Pressley of Massachusetts and Rashida Tlaib of Michigan.

Following the initial criticism, Boebert’s campaign sent an email Nov. 20 that bragged about how the congresswoman “called out ‘Jihad Squad’ member Ilhan Omar for sitting on the foreign relations committee while praising terrorists” and provided links to clips of Boebert’s floor speech. Though former President Donald Trump has accused Omar of praising al-Qaeda, she’s not on the record making any such comments.

If Lauren Boebert, at a campaign event, suggested Ilhan Omar was a threat to blow up the US Capitol Building, is that enough for Boebert to be stripped of committee assignments?

“The other night on the House floor was not my first ‘jihad squad’ moment,” Boebert tells a crowd of unknown size.

She describes getting into an elevator with one of her staffers and seeing a Capitol Police officer running to the elevator.

“I look to my left and there she is: Ilhan Omar,” Boebert recalls. “I said, ‘Well, she doesn’t have a backpack. We should be fine.’” The comment apparently referred to a backpack that might be worn by a terrorist carrying a bomb.

Then, Boebert claims she said, “Oh look, the ‘jihad squad’ decided to show up for work today.”

“Fact, this buffoon looks down when she sees me at the Capitol, this whole story is made up,” Omar said in a Thursday tweet that re-shared the video of Boebert’s campaign event speech. “Sad she thinks bigotry gets her clout.”

“Anti-Muslim bigotry isn’t funny & shouldn’t be normalized,” Omar added. “Congress can’t be a place where hateful and dangerous Muslims tropes get no condemnation.”

Fact, this buffoon looks down when she sees me at the Capitol, this whole story is made up. Sad she thinks bigotry gets her clout.

Anti-Muslim bigotry isn’t funny & shouldn’t be normalized. Congress can’t be a place where hateful and dangerous Muslims tropes get no condemnation. https://t.co/S1APT7RbqW

“Lauren Boebert’s disgusting remark about Congresswoman Ilhan Omar is merely the latest symptom of the anti-Muslim bigotry that has plagued the Republican caucus in the House for years,” Edward Ahmed Mitchell, CAIR’s national deputy director, said in the statement. “Leader McCarthy should repudiate Rep. Boebert’s remarks and call on all Republican members of Congress to treat their American Muslim colleagues and constituents with the respect and decency everyone deserves.”

On Friday afternoon, Speaker Nancy Pelosi and other Democratic leaders in the U.S. House issued a joint statement on Boebert’s remarks.

“Racism and bigotry of any form, including Islamophobia, must always be called out, confronted and condemned in any place it is found,” the statement said. “Congresswoman Boebert’s repeated, ongoing and targeted Islamophobic comments and actions against another Member of Congress, Congresswoman Ilhan Omar, are both deeply offensive and concerning … We call upon Congresswoman Boebert to fully retract these comments and refrain from making similar ones going forward.”

The statement said House Minority Leader Kevin McCarthy “and the entire House Republican Leadership’s repeated failure to condemn inflammatory and bigoted rhetoric from members of their conference is outrageous,” and it called on Republicans “to finally take real action to confront racism.”

Facebook videos from now-Rep. Marjorie Taylor Greene, which Politico reported on in 2020, showed Greene, a Georgia Republican, saying that “anyone that is a Muslim that believes in Sharia law does not belong in our government.”

Faith Miller is a reporter for Colorado Newsline, which first published this report.