It’s the year that was. We need a Rockwell scale to make sense of it.

By Max McCoy
In Commentary 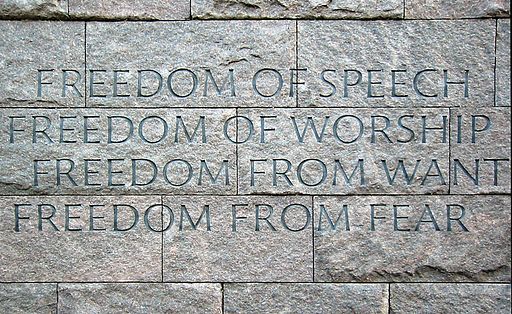 Engraving of the Four Freedoms at the Franklin Delano Roosevelt Memorial in Washington, D.C. CC BY-SA 3.0, via Wikimedia

As the year skitters to an end, there will come a torrent of top 10 news roundups.

Caffeine-fueled news junkies in newsrooms everywhere will count the stories down like the seconds before the New Year’s Eve ball drops at Times Square. But making sense of it all will take more than a list that can be counted on the fingers of both hands. Understanding what we’ve all been through will take years of sifting through the cultural detritus. We know our collective and personal pain, frustration, and sometimes joy. But this first rough draft of history stuff is just that. It’s a sketch, a scribbled note, a quick rendering from life. The final chapter will not, and cannot, be written until long after the clock strikes midnight.

News is a temporal thing, a manifestation of the eternal and ephemeral now. In that way it represents a kind of societal consciousness. Like consciousness, experts argue about how to define it. Many journalists will offer something glib — news is whatever you didn’t know yesterday — or a rubric that includes timeliness, impact, proximity, prominence and uniqueness. Dull stuff, and incomplete. What about irony? Man bites dog. Or arrogance. “If the headline is big enough, it makes the news big enough,” says Charles Foster Kane, the fictional newspaper magnate in the 1941 Orson Welles film, “Citizen Kane,” which he also directed. Or the cynical. “It fills the hole, if not the need,” has been quoted by jaded newsroom veterans from Bangor to Honolulu.

The best definition of news I’ve found in these many trips around the sun is offered by Miles Maguire, author of a textbook for advanced reporting students. “News is what’s not supposed to be.” That’s what Maguire declares in the first sentence of the second chapter, and in the years I’ve relied on his book, I’ve come to agree. It also explains why bad news dominates coverage. If things are going the way you would hope, then happy for you, but it just ain’t news.

Let’s consider the Rockwell Freedom Scale, something I just made up but which we really need. The RFS is a subjective measure (by me) of how well we’re doing to adhere to foundational American values of freedom, as judged by current events.

In 1941, almost a year before the United States would enter World War II but after it was apparent the free world was fighting for survival from authoritarianism, President Franklin D. Roosevelt delivered the “Four Freedoms” speech. It was the right speech at the right time. The Four Freedoms, as presented during a State of the Union address which outlined foreign policy in the broadest strokes, were based in American values. FDR’s aim was to prepare the country for the coming global conflict and also to provide a vision of a “future world founded upon four essential human freedoms.” The Four Freedoms served as the basis for the UN’s post-war Universal Declaration of Human Rights.

You’re probably familiar with the famous Norman Rockwell paintings, which took FDR’s important but abstract ideas and dramatized them in scenes average Americans could relate to. Published by The Saturday Evening Post during the dark days of 1943, the Rockwell paintings provided hope to a war-weary country.

Rockwell’s paintings are a product of the 1940s mainstream, and the faces depicted are white (to get a better understanding of the country at mid-century, look at the work of his contemporary, photojournalist Gordon Parks). Despite the lack of diversity, Rockwell’s paintings portray the fears and hopes for families and their communities during difficult times.

We again find ourselves in difficult times.

The Four Freedoms are more vital than ever, but were strained by the events of 2021.

Freedom of Speech has been under attack across the country, thanks to manufactured outrage over the supposed teaching of critical race theory. School libraries have been scoured for books that might contain CRT or other material that might make some children, or their white parents, suffer cultural discomfort. Here in Kansas, Gov. Laura Kelly has said concern over CRT is a “nothing burger” cooked up for political reasons. It’s an observation that is accurate, but which makes one wince because of the tired political cliche. Can’t somebody write her better sound bites? The Rockwell score: Concerning.

During a year which saw billionaires Jeff Bezos and Richard Branson taking joy rides in tumescent spaceships, Freedom from Want remains out of reach for many Americans. There were a lot of ordinary people worried about paying their bills. The global wealth inequality gap widened in 2021, with billionaires logging their biggest gains on record. Sadly, the United States had one of the highest poverty rates among developed countries. In Kansas, the biggest contribution to wealth inequality came during the February 2021 winter storm, which saw gas prices skyrocket. For five days of natural gas, the energy bill was $1 billion, which will be paid off over the next several years by customers of the state’s utilities. The problem is an unregulated natural gas market with no safety mechanism to dampen price hikes, and no political will to do anything about it. Broken markets are a burden for everyone except the few who profit from them. The Rockwell score: Red flag warning for the future.

In 2021, Freedom of Worship became a tool of the radical right to impose their beliefs on others, at the expense of the public health. In a historic Thanksgiving special session, the GOP-controlled, anti-vax Kansas Legislature passed a bill shielding workers who claim a religious exemption from any federal vaccine mandate. The bill, which was promptly signed into law by Gov. Kelly, also provides unemployment benefits for those who lose their jobs for refusing the vaccine and fines companies for not recognizing exemptions. This was the crowning legislative achievement of 2021 for GOP lawmakers, who have turned their backs on science and public health, weakened the governor’s powers to deal with emergencies, and generally rendered the word “freedom” to mean abandoning one’s civic duty to others. The Rockwell score is Fail.

Which leads us to Freedom from Fear. Where to start? Americans lived in more sustained fear in 2021 than any time in memory. From the Jan. 6 insurrection at the U.S. Capitol to the ever-increasing COVID-19 death toll, there has been a nearly unrelenting stream of crisis news.

Here’s what will lead most news roundups: More than 800,000 Americans have died of COVID-19, according to the Centers for Disease Control. Nearly 7,000 Kansans have died of COVID-19. This, despite the availability early in the year of free, safe, and effective vaccines. By year’s end, the coronavirus was hospitalizing and killing mostly the unvaccinated. But the vaccine hesitant continued to resist, placing unrelenting pressure on the health care system, and pushing some hospitals to the limit.

As if a second full of year of pandemic weren’t enough, we’ve also had to worry about our democracy in crisis. Some of the alleged Jan. 6 insurrectionists, like Topekan Will Pope, were from Kansas. Many of them were whackos, or white supremacists, or neo-Nazis. Just as the anti-vaxxers have been fed lies for political ends, so too have some of our neighbors been misled about the 2020 election being stolen, despite evidence it was the most secure in American history. The Rockwell score is Fail, break your brushes and throw them in the bin.

In such a culturally divided nation, with bad actors spreading lies and insurrection, it’s only natural to be afraid. The fear is rational because the threats are real. But we must not allow our fear to prevent us from doing the important work necessary to care for our neighbors and help restore confidence in American democracy. The thing about the Rockwell paintings is that they depict Americans in context, with their families and in their communities. It’s not other Americans who are the enemy, but the assault on truth by abstraction. Stop the Steal. Health Freedom. The slogans are catchy, but unsupported by objective fact.

We must keep insisting on the consensus of fact that says vaccines work and that our electoral system in 2020 functioned as it should. We must continue to insist that every American has an equal opportunity to vote, to worship or not as they please, and to pursue their own happiness without infringing on the rights of others.

When FDR outlined the Four Freedoms on Jan. 6, 1941, it was a foundational moment.

As old-fashioned as those Rockwell paintings seem now, they reveal a basic decency about everyday American life that we’re in danger of losing. Imagine Rockwell trying to render a Kansas school board or city commission meeting today, with partisans shouting down public officials and comparing mask and vaccine mandates to the Holocaust. I imagine he would bite the stem of his pipe in two.

But maybe I don’t give him enough credit.

There’s another Rockwell painting that really is an extension of his Four Freedoms series. Titled “The Problem We All Live With,” he painted it in 1964. He depicts Ruby Bridges, a 6-year-old Black girl, escorted past protestors by four U.S. deputy marshals on her way to her elementary school in 1960 in New Orleans. Rockwell depicts a real event in the struggle for civil rights, and he does not soften the moment for us. There are racial slurs on the wall behind Ruby, who holds her head high.

Even though Rockwell’s inspiration was a tense moment in the Civil Rights movement, there is a calm about the painting. The only face we see is Ruby’s. The marshals are just men in coats, flanking her, the frame cutting them off at the shoulders. We are walking with Ruby, at her eye level. This is Rockwell, late in his career, reminding us once again of who we are as Americans.

Someday, perhaps years from now, an artist or historian or novelist will render our moment in history, a scene from 2021 or perhaps 2022. She will sift through the cultural detritus and the historic record, searching for the honest and telling detail. She will strive to portray us as we were.

Let us try to be worthy of it.

Max McCoy is an award-winning author, journalist and contributor to the Kansas Reflector, which first published this essay.