WASHINGTON – Partisan gerrymandering has run so wild and rampant since the 2020 census that, hard to believe, the next Congress promises to be even more sharply polarized and gridlocked than the current Congress, and there’s nothing voters can do about it – unless the courts step in boldly, right away.

The media focuses on which of the two major parties is winning but ignores the larger story that average voters are the real losers. We are all the collateral-damage victims of gerrymander wars. The competitiveness and fairness of U.S. elections are taking a terrible beating from the hyper-partisan warfare being waged in this election cycle by both major parties, especially by Republicans with their power monopolies in 23 states, dictating America’s election maps for the next decade.

Republican legislatures in eight key states – Ohio, North Carolina, Texas, Georgia, Florida  Iowa, Tennessee and New Hampshire,  – have been ramping up the maximum partisan advantage to win control of the House of Representatives in the 2022 mid-term elections. They have stacked congressional district maps to lock in eight additional Republican seats.  Plus, Republicans stand to gain one or two more seats in Arizona, where a bipartisan commission has created more GOP-friendly maps. 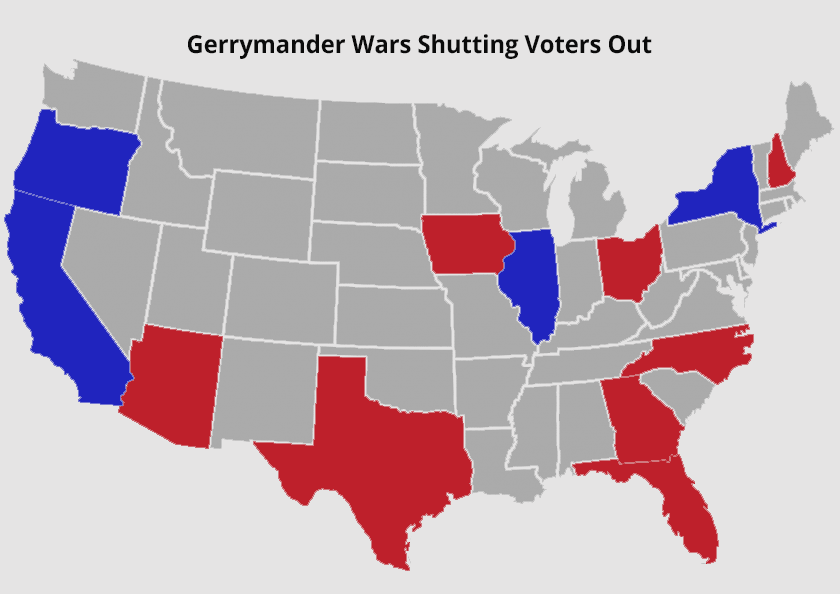 Democrats are counterattacking with their own political trifectas in Illinois, New York, Oregon and New Mexico where they have both the governor and the legislature in their control. They are working to ensure a gain of seven Democratic seats in those states by squeezing out Republican incumbents. Plus, Democrats stand a good chance to pick up another couple of seats in California, where redistricting has put Republicans under pressure and they are likely to slip back from their high tide of winning 11 House seats in 2020.

Most voters are shut out from determining the winner

But even if the two major parties play to a rough draw in their gerrymander wars, that doesn’t save the real losers – millions of rank-and-file voters whose votes will count for less. Competitive districts are shrinking. Each party is stacking the deck on its home turf. In red states like Texas and Florida, red legislatures are making red districts redder, and in blue states, like Illinois and New York, blue legislatures work to make blue districts bluer.

Where does that leave you, the voters? If you’re in the minority party or if you’re one of tens of millions of political independents who now outnumber Republicans and outnumber Democrats, gerrymander wars mean that you, the majority of American voters, are being deliberately shut out of getting to make the real choice of who gets elected to Congress. 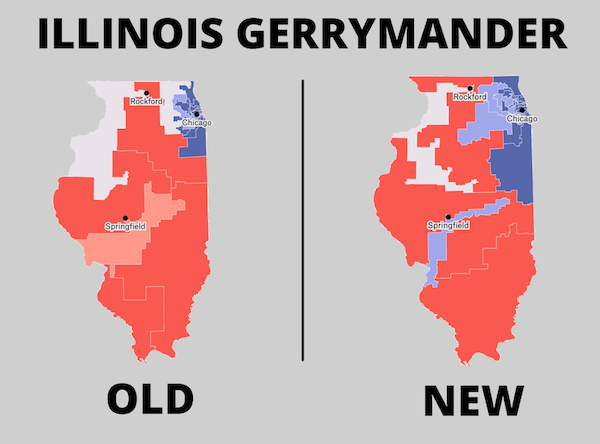 Because in gerrymandered districts, the general election doesn’t actually determine the winner. Gerrymandering has already fixed the outcome. The majority party candidate wins. So getting the majority party nomination is the key to victory, and that means the party primary is the decisive election. Because independents are excluded from party primaries and not many moderates show up, turnout is extremely low, and party diehards dominate. So party primaries favor extremist candidates, both right and left.

When you combine partisan gerrymandering with extremist-friendly primaries, that produces an unworkable Congress, gridlocked from Day 1. The parties clash with their extreme wings able to stalemate issue after issue. Almost any legislative progress is a miracle. Each party blames the other for gridlock, and the pundits fault the president. But it’s the system that’s primarily to blame. Rampant gerrymandering is a formula for policy failure.

Slowly, average voters have awakened to the essential truth that truly competitive elections, district by district, are the lifeblood of our democracy. Competitive elections are what give us, We the People, our bedrock power, our crucial influence on the politicians who are supposed to serve us. When a congressional election is won by a thin margin, 52% to 48% or better yet, 50.2%-49.8%, every vote counts. Democracy is thriving. Competitive districts force politicians to listen to the voters, to pay attention to us, to what we say, and to try to deliver what we want.

Politicians don’t like to admit it, but no candidate from either party – Democrat or Republican – welcomes a tight election. Political parties hate competitive districts.  Candidates have to work harder, raise more money, shake more hands, listen to voters, sweat the vote, and the vote count and the recount. That’s not what they want.  What they want is gerrymandered monopolies to guarantee them re-election.

A recent book on “The Politics Industry” co-authored by Harvard Business school professor Michael Porter compared our two major parties to corporate America. They are wannabe monopolies out to corner the market and crush all real competition. They are out to create what they call “safe districts.” It sounds harmless but it isn’t. Because safe districts are districts owned by one political party – districts created “of, by and for” the politicians, where they face no risk that we, the voters, can vote unpredictably and break their lock on power.

Their key to safe districts is gerrymandering election district maps. Yes, you say, but gerrymandering dates back to the dawn of our republic. True, but it is far more efficient, far more pernicious today than it was 200 years ago because computer software enables parties to rig election maps, block by block, to draw lines down the middle of streets, between dorms on college campuses and between next-door neighbors, all in the cause of partisan victory, not to create a fair and level playing field.

Over the past decade, masses of voters in states like California, Colorado, Michigan, Missouri, New York, Ohio, Utah, and Virginia, have revolted against gerrymandering. Grassroots citizen movements have rebelled against politicians rigging elections to keep themselves in power.  Over the last several years, they have won referendums adopting reforms aimed at ending the political farce of trusting politicians to draw their own district maps – the foxes running the henhouse.

In Colorado, Michigan, and California, the reforms have worked quite well. New independent, nonpartisan redistricting commissions have created more competitive election maps and given more voice, more choice to voters.   But elsewhere, history is running backward this year, strangling the promising reforms won by citizen movements.

In Ohio and Utah, partisan Republican legislatures thumbed their noses at fairness rules endorsed by their own home-state voters and revived their old gerrymander game. In Missouri, politicians confused the voters into rescinding their own reforms. In New York, Democratic lawmakers capitalized on the stalemate on the bipartisan redistricting commission to reclaim partisan control. Same in Virginia, except the reform was rescued by the state supreme court. In Arizona, a supposedly neutral redistricting commission tilted toward the GOP.

But typically the federal court system moves slowly and so the die is cast in most states for the 2022 elections. State legislatures, now incubators and hotbeds of untrammeled partisanship, have openly shown their disdain for voters and for basic fairness in elections  – in the pursuit of perpetuating their own power.  Both parties are guilty. The voters are the victims. The system is rotten to the core, and only popular anger and revolt can stop the rigging of our elections by the candidates and the parties. 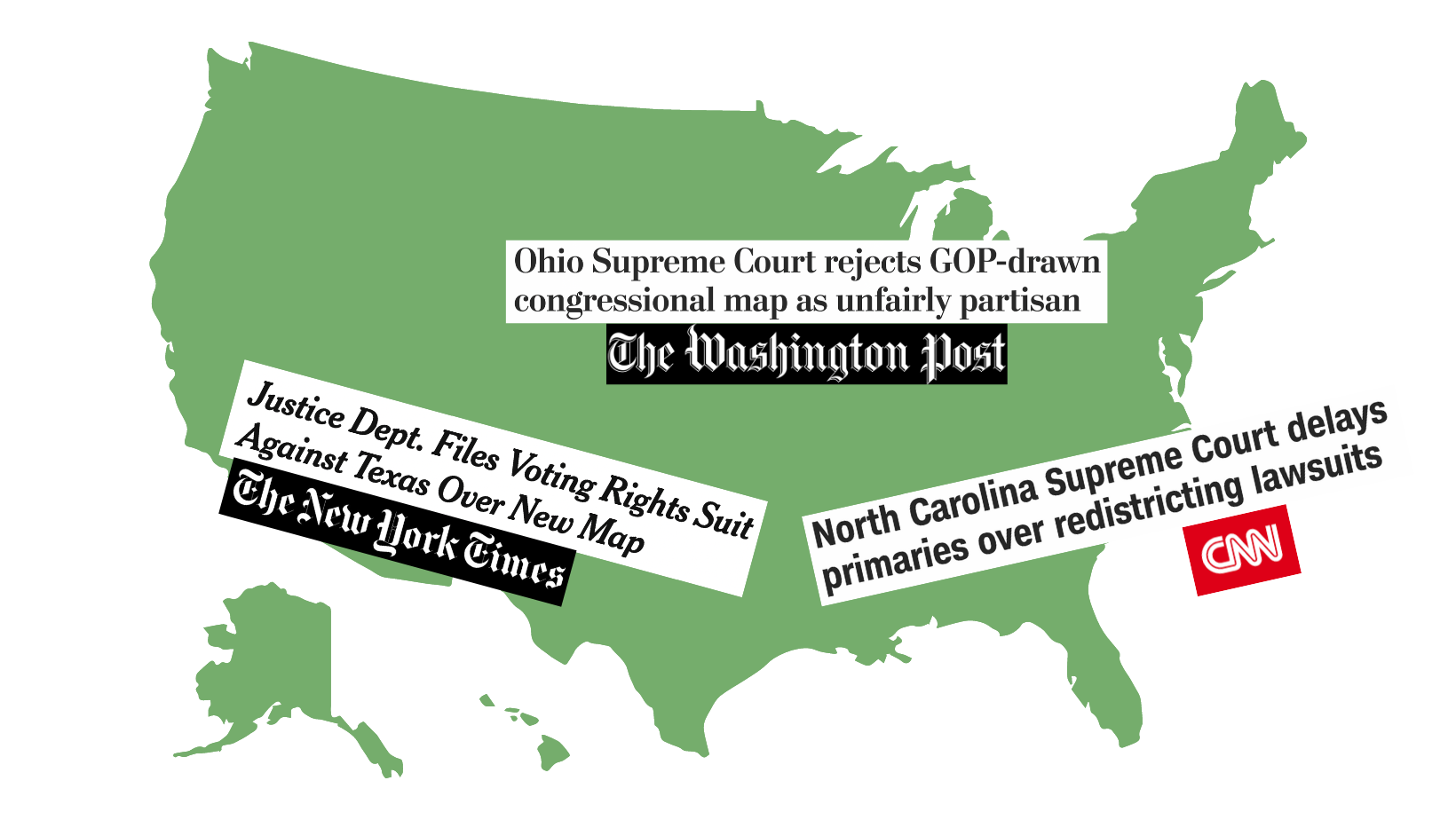