By Chase Woodruff
In Environment, News

A Colorado home burns from open gas lines after a wildfire in October 2020. (Thomas Cooper/Special to Colorado Newsline)

President Joe Biden will announce measures to expand the federal government’s wildfire response and mitigation efforts and increase pay for wildland firefighters during a meeting with Western governors and Cabinet officials on Wednesday, a senior administration official said.

Fueled by climate change, extreme heat and drought across much of the West have led to a highly active start to the 2021 wildfire season, with more than 1 million acres already burned across 12 states, according to the National Interagency Fire Center. In Arizona, the Telegraph Fire has burned more than 193,000 acres since igniting on June 4, while officials in northern California on Tuesday issued evacuation orders amid the rapid growth of several fires in the Mount Shasta area.

Biden will meet virtually on Wednesday with governors from Western states, who are gathering for the annual meeting of the bipartisan Western Governors’ Association, based in Denver. He is expected to announce a series of actions aimed at expanding the Federal Emergency Management Agency’s wildfire response capabilities, as well as “critical new investments” in federal grant programs that help communities mitigate fire risks, a senior administration official said in a call with reporters Tuesday.

Those measures will include additional aerial firefighting resources, the use of satellite technology to improve early-detection efforts, planning for potential impacts to the power grid, and the development of “new apps, maps and resources” to keep the public informed, the official said.

“That’s gonna end in my administration,” Biden said, according to a pool report. “That’s a ridiculously low salary to pay federal firefighters.”

In order to boost pay for firefighters for the upcoming fire season, the Biden administration will offer bonuses and retention incentives bringing them up to the equivalent of at least $15 per hour, the official said. The administration plans to work with Congress on long-term increases to firefighter compensation.

Chase Woodruff is a reporter for Colorado Newsline.

By Chase Woodruff
In News, Voting 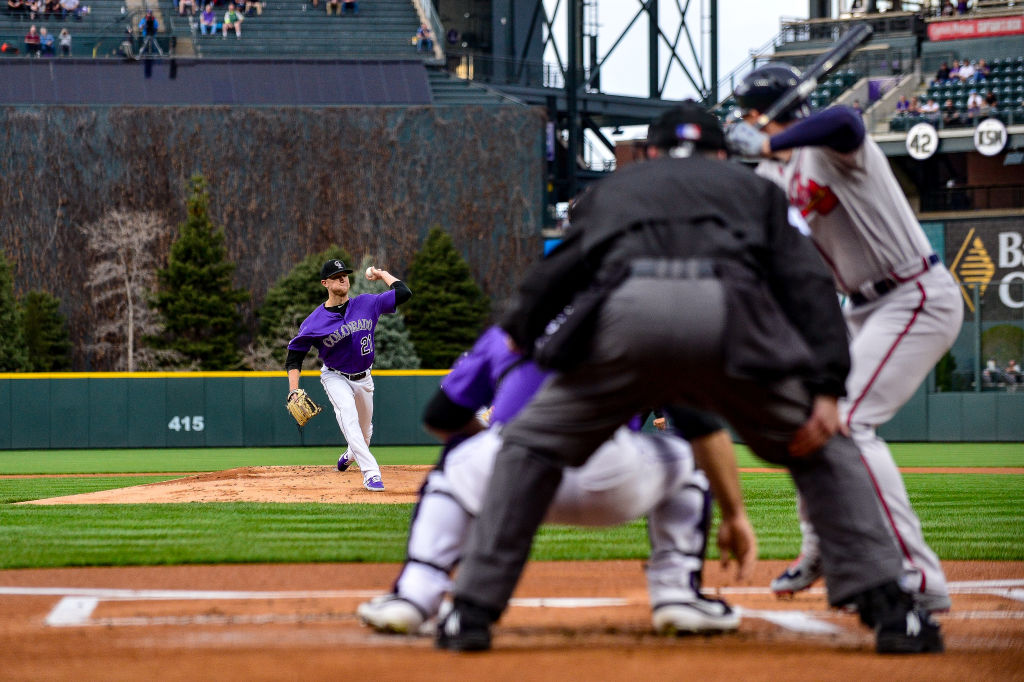 Scene from a 2019 game in Denver – Photo: Dustin Bradford/Getty Images)

Colorado sports fans will get an unexpected treat this summer when Major League Baseball’s All-Star Game comes to Coors Field on July 13, the league officially announced on Tuesday.

“This all moved very quickly,” Denver Mayor Michael Hancock said in a press conference Tuesday. “What usually takes months or even years to happen, happened in just a matter of days. But we are absolutely honored and thrilled.”

The last-minute relocation comes days after MLB announced that it would pull the event from its scheduled venue, the Atlanta Braves’ home stadium in Cobb County, Georgia, over objections to a wave of new voting restrictions enacted by state lawmakers in the wake of President Joe Biden’s narrow victory in Georgia in the 2020 election.

“Major League Baseball fundamentally supports voting rights for all Americans and opposes restrictions to the ballot box,” league commissioner Rob Manfred said in a statement announcing the move. “In 2020 … we proudly used our platform to encourage baseball fans and communities throughout our country to perform their civic duty and actively participate in the voting process. Fair access to voting continues to have our game’s unwavering support.”

The decision was quickly denounced by Republicans in Georgia and beyond, and following the first reports of the All-Star Game’s relocation to Denver, conservatives seized upon a series of false or misleading claims about Colorado voting laws in an attempt to portray MLB’s decision as hypocritical. In one widely shared tweet, Fox News pundit Lisa Boothe accused the league of relocating the event to “a state that has more restrictive elections” than Georgia.

Both Republican and Democratic elections officials in Colorado routinely praise its election system as a “gold standard” for voting across the country, and its turnout rate of 76.4% was second-best among states in 2020, according to the U.S. Elections Project. That’s significantly higher than Georgia’s turnout rate of 67.7%.

“I’m thrilled with the decision to move the MLB All-Star Game to Coors Field in Denver,” Colorado Secretary of State Jena Griswold said in a statement Tuesday. “The truth is Colorado’s election model works. We mail ballots to all voters, have early voting, and same day voter registration. Voters can participate easily in our elections, which are also the most secure in the nation.”

Colorado, which adopted universal mail-in voting in 2013, has such a profoundly different voting system than Georgia that direct comparisons between the states’ two sets of election laws can be difficult. But a review of the key provisions in Georgia’s new elections law, Senate Bill 202, shows clearly that virtually none of its controversial restrictions are currently the law in Colorado.

Colorado automatically sends a mail-in ballot to every registered voter in the state. Georgia just made it illegal for elections officials even to send applications for mail-in ballots to voters.

Absentee or mail-in voting surged in Georgia in 2020 amid the coronavirus pandemic, encouraged by state and local elections officials who mailed blank applications for absentee ballots to every voter in the state for its June primary election, and to every voter in some of its most populous counties during the general election.

That will now be illegal under Georgia’s new law, which allows absentee ballot applications to be mailed only upon request by an individual voter — a far more restrictive system than exists in Colorado, where every active registered voter in the state automatically receives a ballot in the mail roughly a month prior to each primary and general election.

Democrats risk losses in 2022 if they give up on paid leave, advocates say

Interior Department calls for oil and gas leasing updates, but not ending production

The U.S. Interior Department recommended increased fees for oil and gas exploration on federal lands as… [...]

The new state budget, signed into law by Gov. Cooper, the General Assembly included a raft… [...]

Today, the U.S. Supreme Court, an institution that has upheld the basic right to legally access… [...]

Hint: It has something to do with the realities of a market economy “In less than a… [...]

These are, by any fair estimation, divided times in our country. Especially since the onset of… [...]