By Deena Winter
In News 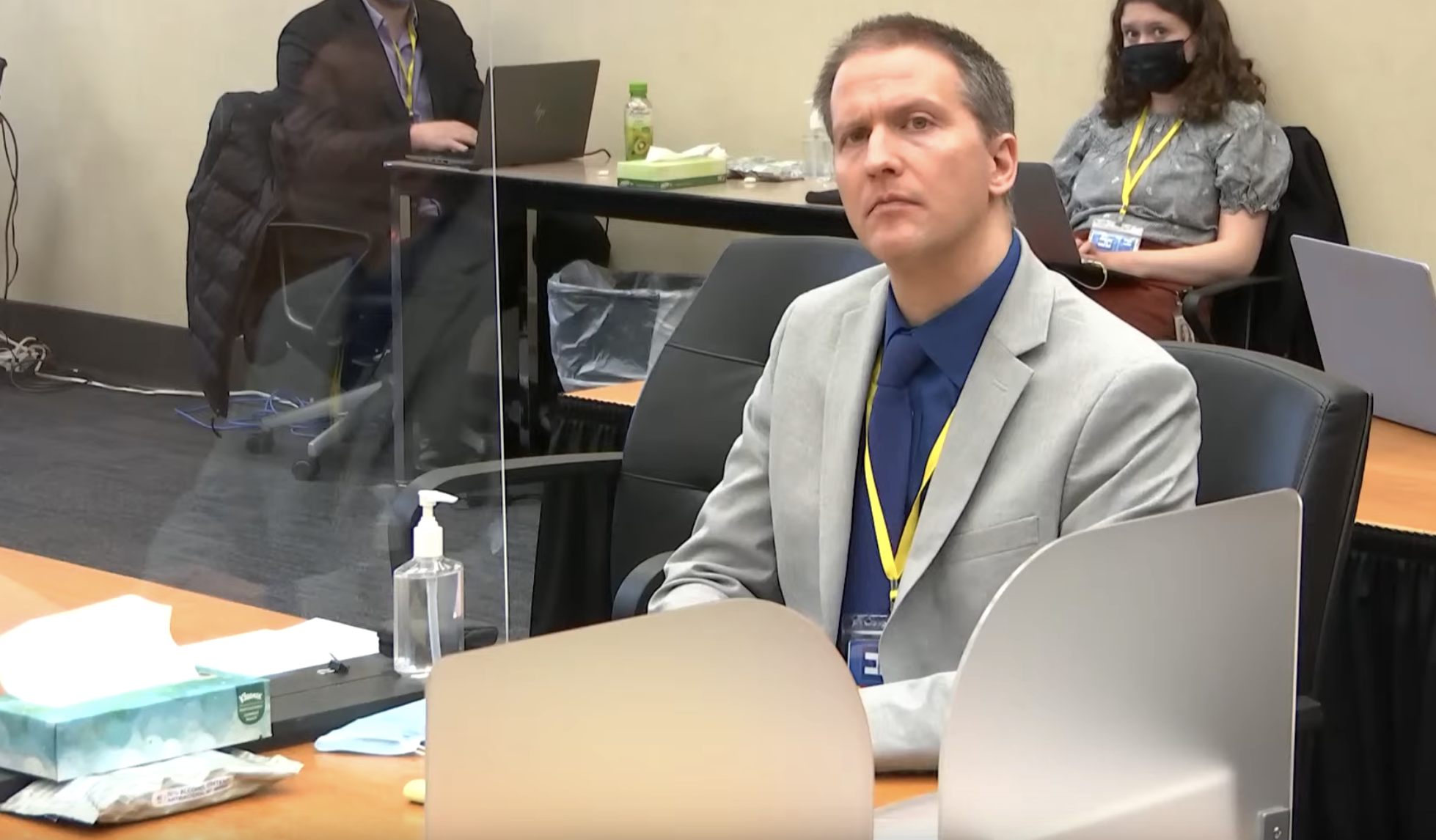 The jury has spoken, and found Derek Chauvin guilty in the death of George Floyd.  The former Minneapolis police officer knelt on Floyd, who was handcuffed and face down on the pavement, for more than 9 minutes at 38th Street and Chicago Avenue last May.

The incident was filmed by a teenager and set off a national racial reckoning after decades in which police killed Black men and were rarely punished.

Prosecutors laid out a case over the course of 15 days that Floyd died due to a lack of oxygen, or asphyxiation, after Chauvin, a 19-year veteran on the Minneapolis police force, knelt on Floyd, 46.

In the video taken by then-17-year-old Darnella Frazier, Floyd’s face is pinned to the pavement, with Chauvin casually atop him, grinding his knee into Floyd’s neck until he went unconscious in 4 minutes and 45 seconds, had no pulse after 5 minutes and died on the street, according to a breathing expert.

Frazier testified during the trial that she’s stayed up nights “apologizing to George Floyd for not doing more and not physically interacting — not saving his life.”

Chauvin’s attorney Eric Nelson argued Floyd died from a toxic mix of fentanyl and methamphetamine and health problems ranging from heart disease to hypertension, noting the county medical examiner found no evidence of injury to Floyd’s neck or back.

After closing arguments, Nelson moved for a mistrial, saying the overwhelming media coverage of the case — including comments from elected officials — was impossible to ignore. (Jurors were not sequestered until they began deliberating Monday afternoon).

The three other officers who were on the scene — Thomas Lane, who held down Floyd’s legs; J. Alexander Kueng, who knelt on Floyd’s back and Tou Thao, who kept onlookers at bay — are scheduled to go on trial in August for aiding and abetting Chauvin.

This story is developing and will be updated.

Deena Winter reports for the Minnesota Reformer, which first published this story.

Chauvin case: Now it’s up to the jury

By Deena Winter
In News, race

Both sides gave their final arguments to the jury Monday in the murder trial of Derek Chauvin, with the prosecution imploring jurors to believe what they saw on videos — three police officers holding George Floyd down for nine minutes and 29 seconds, killing him.

The defense tried to raise doubts about the cause of Floyd’s death.

“His name was George Perry Floyd Jr.,” prosecutor Steve Schleicher said as he began nearly two hours of closing statements. “On May 25, he died face down on pavement on 38th and Chicago.”

He cautioned jurors not to fall for a defense theory that Floyd died due to a toxic mix of drugs and health problems.

“There was no superhuman strength that day,” he said, referring to what cops are taught about people with a controversial condition dubbed “excited delirium.”

He said all that was required of officers was a little compassion in responding to a complaint about a fake $20 bill.

Schleicher said Chauvin’s pride kicked in, and he wasn’t going to be deterred by a crowd of bystanders who had gathered and become agitated and vocal.

“He was gonna do what he wanted, how he wanted, and there was nothing they could do about it because he had the authority,” he said.

Schleicher reminded jurors “George Floyd is not on trial,” although jurors heard about Floyd’s struggles with drug addiction. He noted there was no evidence Floyd was even aware the $20 bill was fake.

He argued Floyd complied with police until they put him in the back of a squad car even though he said he was claustrophobic. When they pulled him back out after a struggle, he thanked the officers.

And then the unreasonable use of force began, he argued, with Floyd saying he couldn’t breathe 27 times in four minutes and 45 seconds. Floyd didn’t “miraculously die of a drug overdose in that time.”

It wasn’t Floyd’s enlarged heart, narrowed arteries, carbon monoxide from a tailpipe or tumor he didn’t even know he had, Schleicher said.

“George Floyd didn’t have to die that day; shouldn’t have died that day,” he said. “But for the fact that the defendant decided not to get up and not to let up, George Floyd died.”

Chauvin’s attorney, Eric Nelson, argued the stress of the situation combined with Floyd’s heart disease, drug use and history of hypertension caused his death, not asphyxiation.  END_OF_DOCUMENT_TOKEN_TO_BE_REPLACED

Chauvin declines to testify in his own defense in George Floyd trial; closing arguments Monday

By Deena Winter
In Courts & the Law, News, race 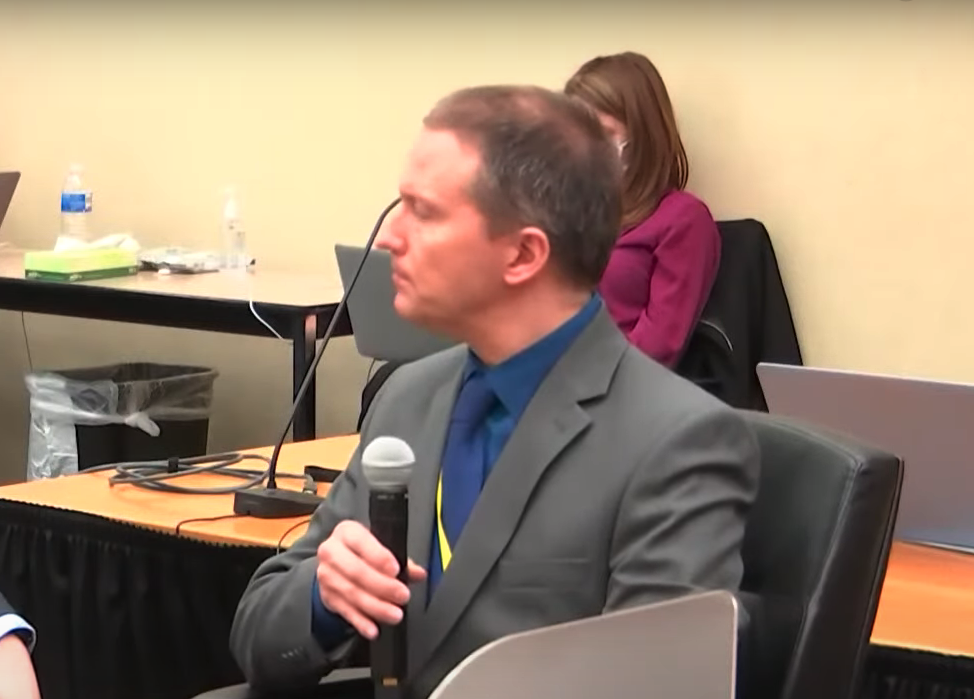 Derek Chauvin, listening to his lawyer Thursday, before saying he would decline to testify in his own defense.

Former Minneapolis police officer Derek Chauvin opted not to take the stand Thursday in the last day of testimony during his murder trial.

Out of the jury’s presence, Chauvin spoke on the record for the first time during the trial, after being handed a microphone and answering his attorney’s questions while seated next to him. He confirmed he decided to exercise his Fifth Amendment right not to incriminate himself.

Chauvin’s attorney Eric Nelson asked him a series of questions designed to make sure he understood his right to testify or remain silent.

Nelson said they’ve discussed the topic multiple times. He asked Chauvin, “You understand that if you choose to exercise that right to remain silent, neither the state nor the court can comment on your silence as a sign or an indication of your guilt. Meaning they can’t say ‘He didn’t get up and defend himself’ — so equate your silence with guilt. You understand that?”

“You understand that if you did in fact testify, you would be subject to cross-examination by the state of Minnesota?” Nelson asked.

“You understand that if you were cross-examined by the state, we could not attempt to limit the scope of your testimony — the state would be given broad latitude to ask you questions?” Nelson said.

“We’ve had this conversation repeatedly, correct?”

“I will invoke my Fifth Amendment privilege today,” Chauvin said.

And with that, the trial resumed.

Prosecutors called back to the stand an Illinois doctor to rebut defense testimony on Thursday before resting its case.

The prosecution wanted to present new evidence regarding the level of carbon monoxide in Floyd’s blood, but the judge would not allow it. END_OF_DOCUMENT_TOKEN_TO_BE_REPLACED

By Deena Winter
In News, Policing

Lawyers say prosecutors have a strong case, but juries can be unpredictable

Minnesota is bracing itself for the March trial of Derek Chauvin, when 12 jurors will decide whether the former Minneapolis police officer committed second-degree murder when he pressed his knee into the neck of George Floyd, handcuffed and face down on Chicago Avenue, on Memorial Day last year.

The story should be familiar to the entire jury pool by now, having traveled from a 17-year-old girl’s cellphone at 38th Street and Chicago Avenue around the world, inspiring protests large and small. From the Champs de Mars in Paris to one mom alone on a Minnesota highway, people raised “I can’t breathe” and “Black Lives Matter” signs. Statues of slave traders were thrown into rivers. Laws were changed. Police were put under a microscope.

It all began when a Cup Foods clerk in south Minneapolis called 911 to report that a man tried to buy cigarettes with a  $20 bill the clerk suspected was fake. Police arrived to find Floyd in a car outside the store. They tried to put him in a squad car, but Floyd resisted, saying he was claustrophobic, so he was moved to the street, face down and handcuffed.

Floyd said “I can’t breathe” 16 times and called “Mama.” Even after Floyd’s eyes closed, after his body went limp, and a full seven minutes after the officers called for medical assistance, Chauvin, who is also charged with manslaughter, kept his knee on Floyd’s neck.

The three other officers who were on the scene — Thomas Lane, who held down Floyd’s legs; J. Alexander Kueng, who knelt on Floyd’s back;  and Tou Thao, who kept onlookers at bay — go on trial in August for aiding and abetting murder and manslaughter. The outcome of Chauvin’s trial will undoubtedly affect their cases.

The way police responded will be scrutinized by a jury, whose selection is scheduled to begin March 8, barring any delays.

The trial will be in the Hennepin County Government Center in downtown Minneapolis, where plywood and barricades have gone up again in case protests are accompanied by looting and arson, as they were last year.

Videos of the incident that sparked a global revolt will come into focus again, except this time played in a courtroom and livestreamed all over the world.

Andrew Gordon tries cases in Hennepin County as director of community legal services for the Legal Rights Center — a nonprofit, community law firm — and expects the defense attorneys to focus on the cause of death.

“Did the knee kill him or did George Floyd die because he was on drugs and he was a bigger gentleman who had heart failure?” he said. “I think at the end of the day, that’s what the defense is largely gonna look like.”

Autopsies will be key

Hennepin County Medical Examiner Andrew Baker will be a central figure. He ruled Floyd’s death a homicide, saying he died when his heart stopped as police restrained him, compressing his neck. The autopsy also said  he had heart disease and fentanyl and methamphetamine in his system, and tested positive for COVID-19.

Handwritten notes from investigators’ interview with Baker say Floyd had 11 nanograms of fentanyl per milliliter in his bloodstream. Baker told investigators that “If he were found dead at home alone and no other apparent causes, this could be acceptable to call an OD. Deaths have been certified with levels of 3 (nanograms).”

Baker added, however: “I am not saying this killed him.” END_OF_DOCUMENT_TOKEN_TO_BE_REPLACED