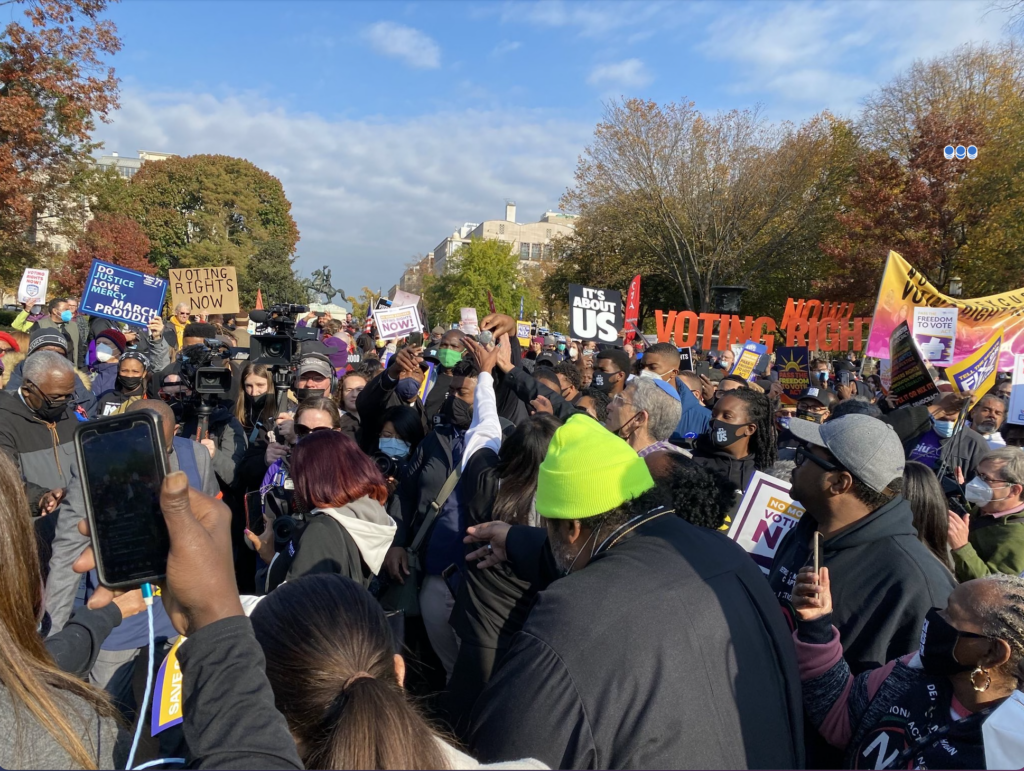 ‘The right time to do right is right now!’

Hundreds of people marched in Washington on Wednesday, singing songs of struggle and calling for the passage of a voting rights bill by the end of the year. Rev. William Barber II marched alongside other faith leaders, poor and working class Americans and allied elected officials, filling the streets around the White House and demanding an end to voter suppression efforts they see gathering steam around the country.

Numerous organizations joined the Poor People’s Campaign including the League of Women Voters, People for the American Way, Declaration for American Democracy, Black Lives Matter, DC Vote, Democracy Initiative, Drum Majors for Change, and the Future Coalition. Some people traveled from far-away states invoking the names of Dr. Martin Luther King Jr., John Lewis and other civil rights leaders who fought to protect voting rights over the decades. More than 200 people were arrested in organized civil disobedience actions, including Barber.

“I want the White House to remember that the scripture says, ‘Woe onto those who legislate evil and rob the poor of their rights, and make women and children their prey,” said Barber. “In every battleground state, if just 20% of poor and low-wealth people who have not voted would vote and be organized together, they could determine every election in this country. And that is the sleeping giant that they are literally afraid of.”

Following the defeat of former President Donald Trump, Republican officials in multiple states introduced a slew of restrictive voting laws that follow a similar model. They cast doubt on the legitimacy of mail-in ballots and ramped up ID requirements, cut back early voting, and added other restrictive measures that are particularly burdensome for the working poor. More localized strategies, like limiting the number of polling sites in low-income and minority neighborhoods, have also had a depressing effect including during Wisconsin’s pandemic elections.

The Poor People’s Campaign condemns the obstructive use of the Senate filibuster, which makes it impossible to pass non-budget legislation without a 60-vote supermajority. By relying on the filibuster, Republicans have been able to stonewall voting rights legislation. . Wisconsin Senator Ron Johnson backs the use of the filibuster and has continued to cast doubt on the results of the 2020 election. In July, the Poor People’s Campaign issued an open letter to Johnson demanding he change his stance. But it’s not just Republicans voting rights and reform activists are holding responsible. END_OF_DOCUMENT_TOKEN_TO_BE_REPLACED