Virginia health providers: “Kids are completely excited about getting a shot.”

By Kate Masters
In Uncategorized

Editor’s note: Earlier this week, Policy Watch reported on North Carolina’s progress in administering 24,000 doses of the Pfizer vaccine to children ages 5 to 11. Our neighbors to the north report nearly 5 percent of Virginia’s 5 to 11-year-olds have gotten their first doses and officials are hoping for continued demand. The Virginia Mercury’s Kate Masters reports:

More than 35,000 children were vaccinated in the first week of Virginia’s pediatric rollout

Among the things that Pearl Barry is excited to do once she’s fully vaccinated: hang out with friends, eat inside at restaurants and visit SkyZone, a sprawling indoor trampoline park.

“I mean, obviously,” said the eight-year-old from Bon Air. “Who wouldn’t be?” She got her first dose of Pfizer’s pediatric vaccine on Wednesday night, and besides the hour-long wait at her local Walgreens, the process went relatively smoothly. The shot itself felt like the smallest pinch ever, Pearl said — more like a mosquito bite. And her dad, Tim Barry, was equally relieved to see both Pearl and her 5-year-old sister, June, take their first steps toward full immunization.

“Pearl probably asks to go to SkyZone two or three times a week,” he said. “So we’re really excited to have this coincide with Christmas and be able to be more free about seeing friends and family.”

Across Virginia, other parents are feeling the same jubilation. In the first week after federal officials authorized Pfizer’s COVID-19 vaccine for 5 to 11-year-olds, more than 35,000 children received their first dose — close to 5 percent of the state’s total population in that age group, according to data from the Virginia Department of Health.

The rush by many families to embrace pediatric vaccines has been a relief for state health officials after national polling (conducted before the federal authorization) indicated only 27 percent of parents planned to get their children immunized “right away.” VDH hasn’t released demographic data on the 5 to 11-year-olds who have already received their first doses, making it difficult to determine whether disparities have emerged between different groups in getting the shots. END_OF_DOCUMENT_TOKEN_TO_BE_REPLACED

By Kate Masters
In COVID-19, News

[Editor’s note: Last year, in a story that referenced worrisome examples from North Carolina, the New York Times reported on how insufficient staffing has brought about big problems at American chain pharmacies that are endangering public health.

This morning, in a new report for the Virginia Mercury, reporter Kate Masters relates similarly troubling developments from our neighbor to the north at a chain pharmacy with hundreds of outlets in North Carolina.]

Understaffing at some CVS pharmacies in Virginia has put patients at risk, former employees say

One location in Virginia Beach was fined $470,000 for serious dispensing errors. Pharmacists say its a systemic problem.

Over the last two years, employees at a CVS Pharmacy in Virginia Beach have raised repeated concerns over patient safety.

At one point, multiple pharmacy technicians told a state inspector that a pharmacist at the store had mistakenly given a patient a hundred extra doses of Percocet — a powerful prescription opioid. Another customer received an antibiotic despite a known history of not tolerating the drug and was taken to the emergency room after an allergic reaction.

In another instance, a patient received the right medication with the wrong instructions, according to another pharmacy tech, who said the oral cholesterol drug came with directions to insert the pills vaginally.

The root of the errors, employees said, was chronic understaffing and an unsustainable workload that made it impossible for pharmacists and technicians to focus on their jobs.

“The pharmacists cannot properly concentrate because they have so much to do,” said Kristopher Ratliff, a member of Virginia’s Board of Pharmacy, reading from a more than 600-page investigative report produced by state regulators.

“A staff pharmacist stated hours had been cut to the point where she didn’t know how the pharmacy was supposed to function,” added Mykl Egan, the board’s discipline case manager, reading from the report. “A fourth pharmacist described the pharmacy as a ‘sweatshop.’”

The findings, which covered a single CVS store, resulted in a $427,000 fine for the chain and one unannounced inspection within the next 12 months. CVS “respectfully disagree[s]” with the board’s order, according to spokesman Mike DeAngelis, and is “considering our options” for potential next steps.

But news of the investigation came as no surprise to former CVS employees in Virginia, who said working conditions were so bad that they had affected their mental and physical health. Nor were the problems contained to a single store, according to two former pharmacists, who worked in multiple locations across the state and heard similar concerns from other staff members.

“The sheer number of people who go home and cry because of the pressures they’re under — it’s unbelievable,” said Michelle Harmon, a former CVS pharmacist in the Hampton Roads region who’s still part of a Facebook group for mothers in the industry. “You’re so mentally drained you don’t have time for your family. I was just existing — going to work, coming home, doing whatever I could to hit the numbers so my patients were taken care of.”

Safety and staffing issues at national pharmacy chains have become a growing issue for state regulators both in Virginia and across the country. A 2020 investigation by The New York Times found that at least two dozen states have received multiple complaints from pharmacists and physicians worried that chain pharmacy policies are undercutting patient care. END_OF_DOCUMENT_TOKEN_TO_BE_REPLACED

By Kate Masters
In News 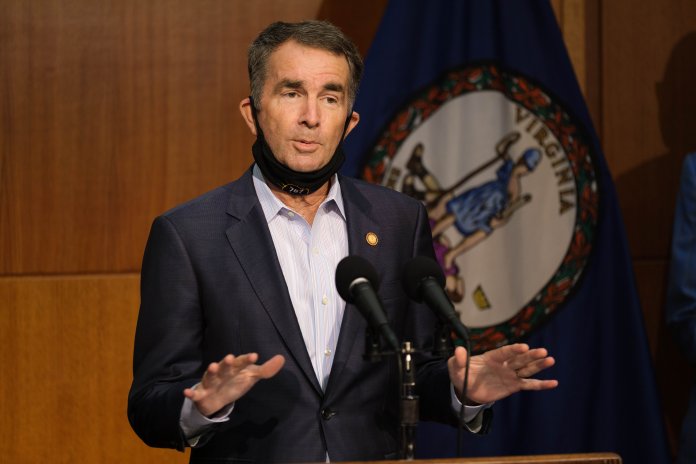 An FBI special agent testified during a hearing in federal court that the three defendants had discussed “taking out” a sitting governor, specifically mentioning Whitmer and Northam in response to their public health restrictions during the COVID-19 pandemic.

Northam’s spokeswoman, Alena Yarmosky, said in a Thursday statement that the “the FBI alerted key members of the Governor’s security team throughout the course of their investigation.” But “per security protocols for highly-classified information, neither the governor nor other members of his staff were informed,” she added.

“At no time was the Governor or his family in imminent danger,” Yarmosky said. “Enhanced security measures have been in place for Governor Northam and his family for quite some time, and they will remain.” She also blamed tweets from President Donald Trump for inciting violence against Northam.

“Here’s the reality: President Trump called upon his supporters to ‘LIBERATE VIRGINIA’ in April — just like Michigan,” she added. “In fact, the president regularly encourages violence against those who disagree with him. The rhetoric coming out of this White House has serious and potentially deadly consequences. It must stop.”

Joe Macenka, a spokesman for the Capitol Police, wrote in a Thursday email that “all threats of this nature are taken seriously and investigated thoroughly by the Division of Capitol Police, the Virginia State Police, the FBI and any other appropriate law enforcement partners.

“That said, we do not comment on operational specifics for the simple reason that doing so might endanger our stakeholders or law enforcement agencies,” he added.

Northam first implemented a stay-at-home order for Virginia in late March, but the state has gradually been easing restrictions through the spring and summer. Currently, the commonwealth is in Phase Three of its reopening plan, which allows for indoor dining and recreation activities such as indoor swimming as long as certain precautions are followed. Unlike many other states, Northam never required brick and mortar retail spaces to close.

Tuesday’s hearing included a wide sample of evidence collected during the investigation against the defendants, who were indicted with four other members or connections of a Michigan-based militia known as the Wolverine Watchmen.

The group was implicated late last week for the plot against Whitmer, part of a wider plan for a anti-government uprising.

It’s not the first time a threat has been made against Northam. Last year, as Virginia Democrats prepared to introduce new gun control legislation in the General Assembly, a Newport News man was arrested and charged with one felony count of threats to bomb or burn after threatening to kill Northam and burn the executive mansion down. In January, Northam also banned guns on Capitol Square after “credible threats of violence” in advance of massive gun rights rally that brought thousands of armed demonstrators to the streets around the Capitol.

Kate Masters is a reporter for the Virginia Mercury, which first published this story.