No justice for sale in North Carolina

Frightening, considering scandals like the 2004 West Virginia election, when the CEO of Massey Coal spent $3 million to help elect Brent Benjamin to the state’s highest court. This is even more alarming considering how the recent Supreme Court decision Citizens United has opened the floodgates for special interest spending, putting the 2010 election on track to be the most expensive election in history.

Spending is already up 40% from 2008 presidential election according to the Campaign Finance Institute, and is expected to grow as spending peaks prior to Election Day.

Fortunately, North Carolina has a system to stop judicial elections from being overtaken by special interest spending. After the state enacted the nation’s first judicial public financing program in 2002, the percent of money from attorneys and litigation-interested PACs went from 73% to the total before the program and 14% after. Voter-Owned Elections or public financing gets to the core problem — the dependency of politicians on private campaign money that all too often come with strings attached.

What have Voter-Owned Elections done for you?

When President Obama went on The Daily Show two days ago, he highlighted one of his administration’s key accomplishments:

[W]e have empowered state insurance commissioners to review the rate hikes that are taking place in states. And some states, like North Carolina, they’ve already used it and rolled back premium increases by 25 percent.

But that benefit to North Carolinians didn’t happen by accident. State Insurance Commissioner Wayne Goodwin used the federal Affordable Care Act to engage in tough negotiations with state insurers that freed up $155.8 million in contract reserves — money that went back into the pockets of state consumers.

Are you surprised that North Carolina was one of the first states to roll back insurance premiums for average citizens like yourself?

I’m not.  The North Carolina insurance commissioner’s race is publicly-funded election. In 2008, both the Democratic and Republican candidates for Commissioner of Insurance chose Voter-Owned Elections by raising small qualifying contributions between $10 and $200 from registered North Carolina voters.

A NC Voters for Clean Elections study of the Commissioner of Insurance race found that the percentage of campaign money taken from regulated industries (e.g., the insurance industry) dropped from 66% in 2004 to less than 5% in 2008.  Overall, the total money the insurance industry spent on the election dropped six-fold, despite the race being significantly more competitive.

The result: Neither candidate, including the winner Wayne Goodwin, were beholden to the insurance industry that the commissioner regulates — making it a lot easier to fight for consumers’ interests.

Having an elected official who is willing to stand up to the special interests can and did save North Carolinians tens of millions of dollars.

As record amounts of money are being poured into this year’s elections, support for publicly-financed, “clean elections” is growing among state lawmakers.

NC Voters for Clean Election’s 2010 Campaign Finance Reform Scorecard, finds that even though measures to expand an innovative Voter-Owned Elections program to more state-wide races didn’t pass this legislative session, more state lawmakers earned perfect 100% scores for their support of election reform than ever before.

This election year is showing just how important it is to have a clean elections alternative to campaigns run by big money.  North Carolina is a national leader in campaign finance reform, and support for reform continues to grow.

Currently in North Carolina, appellate judges and some Council of State races can use Voter-Owned Elections – an alternative campaign financing system that reduces candidates’ reliance on raising money from special interests. Under the system, candidates who prove they have broad public support from small donors and agree to strict spending and fundraising limits can receive a public grant for their campaign.

An initiative to expand Voter-Owned Elections to five more Council of State offices and create a sustainable fee-based revenue stream for the program was contained in the Senate’s ethics bill. However, the reforms were pulled from the final version of the ethics bill after an aggressive call-in campaign led by the group Americans for Prosperity, a group backed by North Carolina conservative philanthropist Art Pope of Raleigh.

Although the “clean elections” measures didn’t pass, the overall grades state lawmakers earned for their support of campaign finance reform has continued to grow. In 2010, 48% of House members and 52% of Senators had perfect scores – up 20% in both chambers from 2008.

More and more, North Carolina leaders see Voter-Owned Elections as the answer to the mushrooming problem of big money in politics.   These reforms offer a proven way to improve our elections and state legislators have taken note.

The full results of the Scorecard can be downloaded from www.ncvce.org.

If it wasn’t for those darn meddling kids… Already this election season North Carolina has seen a record amount of outside special interest money flooding the airwaves and threatening to drown out the voices of ordinary  North Carolinians.  As Chris Fitzsimon reported today, it was bad enough when special interest shadow groups flooded elections with spending in prior elections. Not only has the Supreme Court deregulated corporate spending in Citizens United v FEC now it is nearly impossible to discover who is putting up the money to influence elections.

The whole endeavor is like an episode of Scooby Doo gone wrong. Enterprising truth seekers like Scooby-Doo and the Gang could swoop in, unmask the villain and discover what was really going on. Post-Citizens United, special interests lurk in the shadows — but the mask is never unveiled, and voters are left  wondering if that special interest spending is a real zombie.

In a world where powerful interests don’t have to let us know what they are spending to influence elections, the mystery is never solved.

Earlier this year, Congress filibustered a bill that would have made it easier to unmask big contributors to elections. But there’s another option: Why don’t we stop the chase by taking Big Money out of the equation altogether?

So, how do we stop the masked villains? One way is through public financing.

The Fair Elections Now Act models a program that has worked here in North Carolina. It provides a system of public financing, that keeps the big  special interest money from being the only game in town. Candidates would renounce political action committee gifts and finance their campaigns with a blend of small donations from individuals and grants from a special Fair Elections Fund. Candidates could accept only donations of $100 or less.

Most important – despite what masked villains say, this will not be funded on the tax payer’s dime.

It’s a scary world out there – but at least the Fair Elections Now Act would help us regain a government of, by, and for the people, not one bought and paid for by spooky special interests.

Shocking report – conservatives and liberals can actually agree on something!

The current political environment has seemingly produced partisan battles on every issue. But the Fair Elections Now Coalition, a coalition of good government groups, has found an issue on which the left and right have common ground: the undue influence of money in politics.

Representatives from the coalition went to rallies organized by self-described liberal and conservative groups and found them saying almost exactly the same thing about the need for the Fair Elections Now Act. Check out the video and you’ll be surprised! 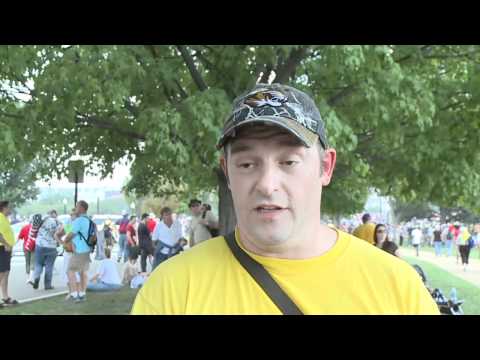 The Fair Elections Now Act would make politicians accountable to voters instead of special interests and lobbyists. With Fair Elections, candidates can run competitive campaigns for office by relying on small donations from people back home. The legislation has the broad, bipartisan, and cross-caucus support including lead sponsors Democratic Caucus Chair Rep. Larson (D-Conn.) and Rep. Jones (R-N.C.).