More and more students these days work hard to juggle school, work, and family in order to attain postsecondary credentials. More than one in four community college students nationwide are also parents.

Access to reliable, quality child care is critical for the postsecondary success of these student parents. And with that educational success comes the potential for building greater economic security, in turn creating thriving communities and a stronger economy.

But for many students with caregiving responsibilities, the cost of quality care is simply out of reach. The average annual cost of full-time care at a child care center in North Carolina is approximately $8,500 per child, an amount that is unaffordable for many working families, much less those trying to also invest in their education.

North Carolina’s subsidized child care program helps reduce the high cost of child care for low-income families and ensures that parents have the supports they need to maintain employment and pursue education.

Watch Kemonie’s story to learn more about how crucial North Carolina’s child care subsidies program is to the success of our families and communities. 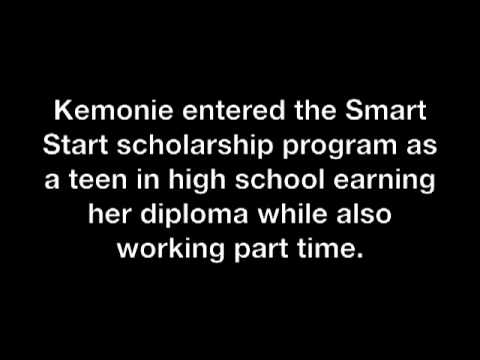 This post is part of a blog series on the crucial role of quality early childhood education and child care in caring for our youngest residents, creating thriving communities, and promoting a healthy economy. Learn more about the programs we are discussing this week and take action here.

Spotlight on early childhood: Giving our kids a good start is not a game I remember the board games of my childhood with a sense of nostalgia. Candy Land, Connect Four, Hungry Hippos, Operation, and Chutes and Ladders are just a few of the games that I remember playing with cousins and friends. I can imagine if I were to visit my 8-year-old self and ask her if she’d like to play a life-sized version of any of those games that I would have squealed with joy at the prospect!

This spring and summer, during the height of the legislative session, North Carolina MomsRising visited 7 cities along with a life-sized game of Chutes and Ladders comprising of a 40 foot long game board. Parents in the community, local elected officials, child care providers, business leaders, law makers were invited to come out and play the game which focused attention on the importance of investments in the children of our state. Families in Southport, Wilmington, Greenville, Goldsboro, Raleigh, Durham, Burlington, and Charlotte all came out for a day of fun and more than a few parents and children alike expressed how impressive they thought the board was. There were snacks, hula hoops, bubbles, crafts, and music for everyone to enjoy during breaks from the game. The board was moved from city to city, placed in parks, community centers, and even at the NC General Assembly.

While the children played the game, moving from square to square, sometimes landing on a ladder, which moved them up the board (and closer to winning) or sometimes landing on a dreaded chute (the slide that would send them backwards in the game), parents played along and read the information printed on the board. One ladder emphasized that high quality early education programs help our children succeed in school and life. A chute, or slide, sent the players back as they learned that in 2011, 30% of North Carolina children under the age of 5 lived in poverty.

The first 2000 days of a child’s life are when 90% of brain development occurs. It is astonishing to think that in these first five years leading up to a child’s first day in kindergarten are a time when the roadmap for future success can be cultivated, or deterred. END_OF_DOCUMENT_TOKEN_TO_BE_REPLACED

This post is part of a blog series on the crucial role of quality early childhood education and child care in caring for our youngest residents, creating thriving communities, and promoting a healthy economy. Learn more about the programs we are discussing this week and take action here.

Worst of all, inadequate rates can lead to fewer low-income children being served as child care centers refuse to accept low-income working parents who can’t pay the full cost of care. When priced out of the market of high quality programs, these parents have fewer child care options END_OF_DOCUMENT_TOKEN_TO_BE_REPLACED

*By Stephanie Fanjul, President of the North Carolina Partnership for Children

The federal shutdown had the potential to impact over 36,000 children under five who were at risk of losing their child care, but Smart Start was able to keep most of our youngest children from bearing any of the burden of the loss of federal funds.

Smart Start partnerships across the state brought their communities together, bringing Division of Social Services (DSS) local officials, parents, providers and community leaders together to figure out the best way to make sure our youngest children continued to receive quality care.

The state-wide network of Smart Start partnerships proved to be critical in protecting children and supporting providers by leveraging expertise and experience across the state while effectively tapping into local resources. With partnership staff working at the local level to address immediate concerns facing families and connecting with community stakeholders, and the North Carolina Partnership for Children (NCPC), the organization that leads Smart Start, engaging with state agencies and sharing information across all counties, the network provided a support system that prevented a disaster.

Here are just a few examples of local action: END_OF_DOCUMENT_TOKEN_TO_BE_REPLACED

Spotlight on Early Childhood: A Look Back at the 2013 Legislative Session

**By Rob Thompson, Executive Director of the Covenant with North Carolina’s Children

This post is part of a blog series on the crucial role of quality early childhood education and child care in caring for our youngest residents, creating thriving communities, and promoting a healthy economy. Read the introduction to this blog series and learn more about the programs we’ll be discussing here.

The state Senate, which took the first stab at the state budget, approved substantial funding transfers that would have dismantled the state’s early childhood infrastructure. The Senate budget required all child care subsidies to be administered by local Departments of Social Services (currently, child care subsidies are distributed to families by both local Smart Start agencies and Departments of Social Services.) This change would have stripped 40% of the overall Smart Start budget and would have likely resulted in the closure of several small-county Smart Starts.

Additionally, the Senate budget proposal would have transferred 5,000 NC Pre-K slots to the child care subsidy program, resulting in a net loss of 10,000 slots by 2015 (due to expiration of 5,000 one-time slots funded by Governor Perdue). END_OF_DOCUMENT_TOKEN_TO_BE_REPLACED